Is there ever a good time? (Retinitis Pigmentosa)

Is there ever a good time to find out if your sons have a degenerative eye disease?

Do we want to find out?  Not really, no.

Legoman is 9 years old, and just over the past couple of weeks I have noticed his eyes are changing colour.  This may have been happening more subtly over a longer period but I have only just started to notice. 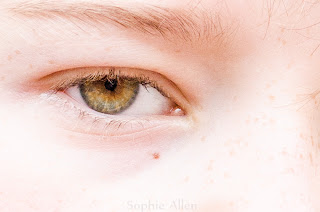 I have enlarged this pic, that was taken in September 2012 so you can see the colour better.

He has always been a brown hazel eyed boy, same eye colouring as me.  But now we are noticing his eyes seem to be changing to green, like his father. So of course I went to me googlepedia for answers.  It could be completely nothing, it sometime can just happen.  It can happen during the onset of puberty (which could very well be the case) or unfortunately there are a few medical conditions that can cause it also.

So after speaking to the optometrist, and to rule out anything sinister, he has an appointment Tuesday afternoon to get things checked out.

I am a carrier of Retinitis Pigmentosa (RP), my Dad has the diseases and he is now legally blind and uses a cane.  Two of my uncles also have (or had) the disease and they are (were) totally blind.  I have cousins with RP, once of which began developing symptoms in his 30's.

Retinitis Pigmentosa (RP) is the collective name for a range of genetic (hereditary) diseases that damage the retinal rod and/or cone cells and cause vision to fade. According to some estimates, about one in every 3,000 Australians is affected by RP. The severity of symptoms, speed of progression and age of onset depend on individual factors such as the type of RP. There is no cure, and no treatments are available to slow the progression of disease.


X-linked Recessive Inheritance Pattern
This is the least common form of RP. This form is carried by the female and passed onto the male, there is a 50% chance that each son will have RP. There is also a 50% probability that each daughter will be a carrier.  X-linked RP is the one form in which carriers can often be detected.

This diagram depicts the four possible combinations of genetic input from a couple, each contributing a copy of each of their genes. The woman is a 'carrier' of X-linked RP; the mutant gene on the X chromosome is represented by "r". The man can only convey normal genes.

So our four sons each have a 50% chance that they will be affected by this disease.  There is no way that we will be lucky enough to escape this, not entirely and possibly not at all.

So over the last couple of days I have struggled with this, feeling guilty, crying even.  Ridiculous.  It is not my fault, and I know it is not a result of any decision I have made in my life.  It was just how the cards fell. There is nothing we can do to change the outcome, and something inside me just doesn't want to know yet.

I am not ready to explain to my 9 year old son that he may lose his vision at some stage in his life, though hopefully much, much later in life.

During the eye test, it will be clear to the Optometrist if he has RP or not.  It is a simple test that we had decided not to have done as yet.  But we will be there and she will be looking, she will know.  Part of me wants to ask her not to mention it at all, be it good or bad news.  Part of me wants to know, but only if it is good news, so therefore I would then know in turn if it wasn't.


So do you see my conundrum?

What would you do if you were me?


Come visit me tomorrow for my first ever Photography linkup!  Read about it here.