On Saturday night the Aurora forecast was high due to the arrival of a Coronal Mass Ejection (CME) courtesy of the sun.  It has been coming and going now for weeks, and we (we as in mostly Coder) have been trying to photograph it. We can see aurora from Tasmania a few times a year, but especially in winter. This event's strength was rated about a 6-7 out of 10. You could have likely seen parts of it from as far north as Perth!

There has been some amazing photos popping up on Facebook, but it's not the same as capturing it yourself.  To get the best vantage point it means climbing up the hill, at the back of our property, it also means doing so in the dark.

On Saturday Coder canvassed the situation first, trekking up alone, with camera, to see if it was going to be worth having another crack at it.  The text messages I received from him were encouraging and I began organising the kids into warmer clothes while we waited for him to come back, as we wanted them to experience it aswell.  Because of the earlier Birthday celebrations we also had one of the boy's friends for a sleepover.

So picture if you will, a dark rocky hill, upon which there are 5 children  and 2 adults trying to navigate a clear path to the top.  The lighting spread between the group being one small torch, one iPhone5 and a mini light sabre (with the sabre part missing!).  The toddler is being carried by Coder, and I am carrying the camera on the tripod whilst holding the 4 yr olds hand as he stumbles over literally every rock we encounter.   The torch is being shared between the two seven year olds, so almost completely useless to anyone else, yet they do have a knack for pointing it right in your eyes!

It was quite a journey, amongst torch sharing politics and questions about the distance to the final destination, but we made it to the top.  After setting the camera up we turned off all light and waited for our eyes to adjust.

We were not disappointed, whereas it was not as active as it had been for Coder, the boys did still get to see it, along with the Milky Way, a satellite and even a shooting star!

And it was about then, about 8 minutes in, that the complaining started.  Yes it was cold, yes it was windy, and yes the computers were back at the house.  So Coder took them back to the house and I stayed to try and get some more Aurora photos.

The problem with our vantage point is there is a pretty annoying hill right in the way, with a very annoying flashing red light on top of it (though not annoying for passing planes I am sure).  So I did try and get some without the light, but as it turned out the light really adds something to the photos anyway.

With tripod, shutter release cable and freezing cold hands I persevered, shielding the camera with my body to try and make a wind break.

They may not be brilliant Aurora photos, but what makes them awesome is that we took them ourselves. 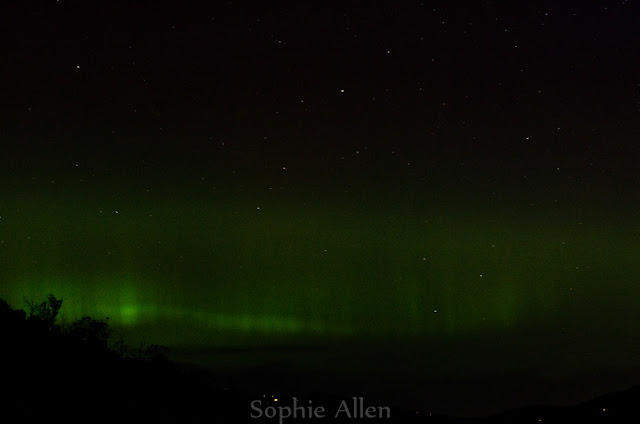 Coder was very fortunate to see the Aurora when it was fairly active and was able to get these few photos before the kids came out. Photo by Coder. 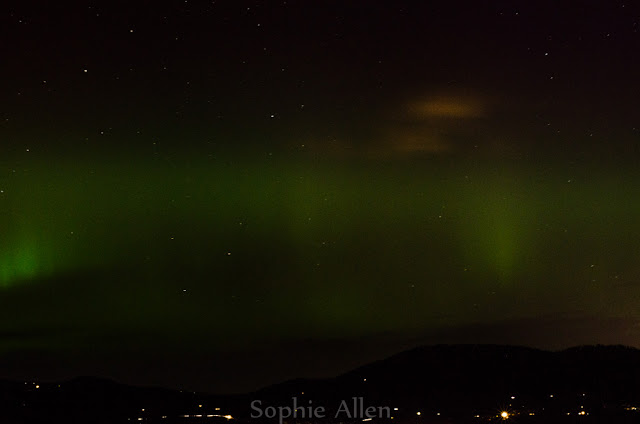 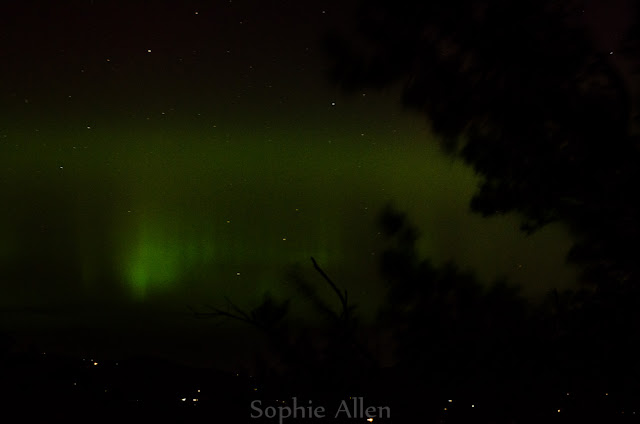 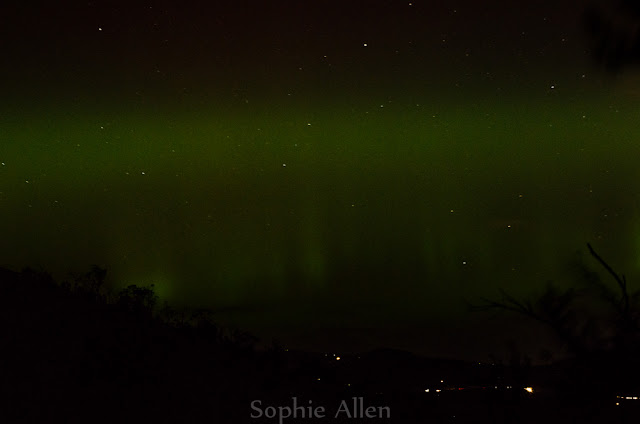 Curtains of Aurora.  Photo by Coder. 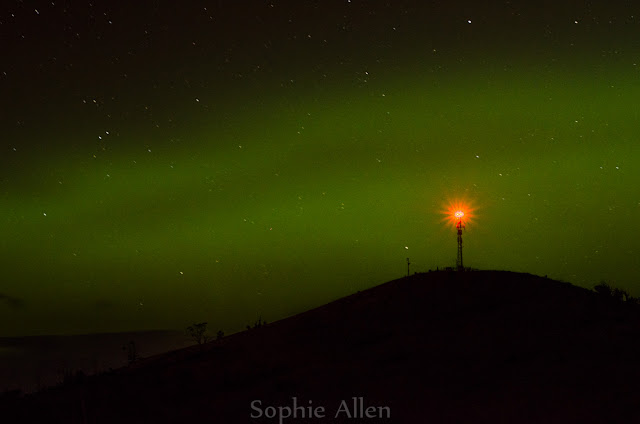 There is that light I was telling you about. 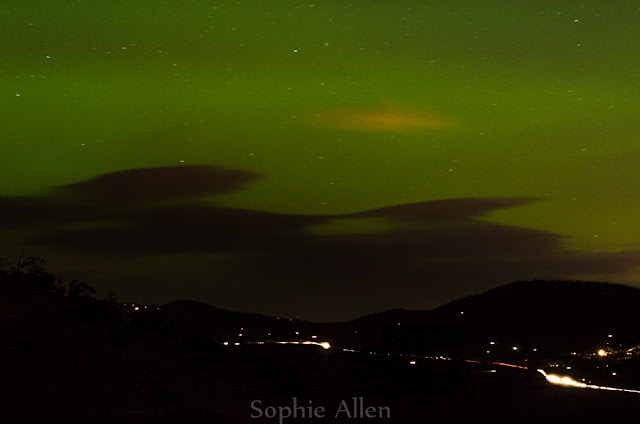 The clouds were starting to gather, but in this case, looking back towards Hobart they helped to block out the city light horizon glow. 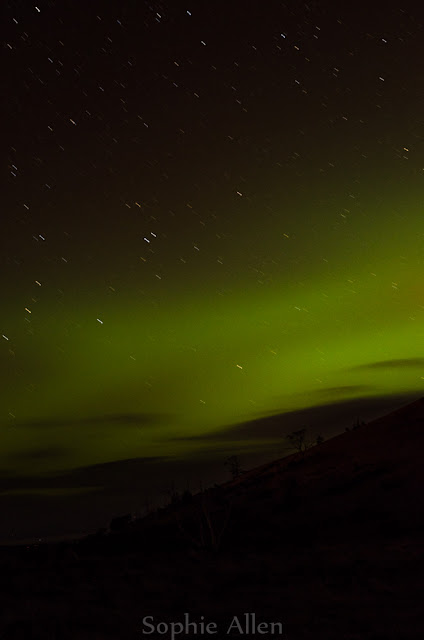 I was trying to get a photo without the red light!  I had the shutter open for around 50 seconds in this one, and it caused star trails. 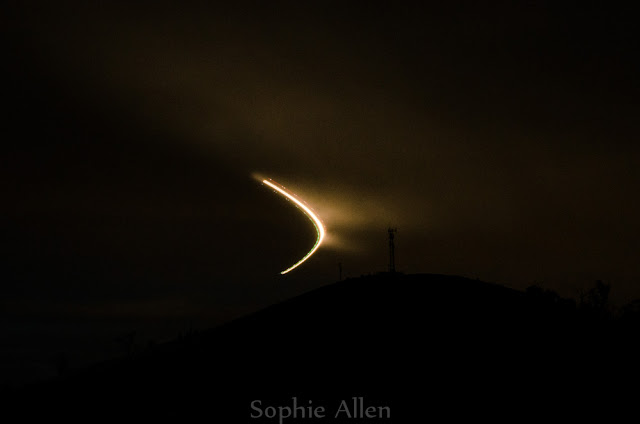 And this photo was taken about a week earlier, by Coder.  Pretty cool hey! It was a plane taking off.  Notice there is no red light, it was installed on the tower only very recently.


I am linking with Essentially Jess, for IBOT (I blog on Tuesdays).