The things we do!

I am now an expert in the field of lizardy.  Similar to wizardry perhaps, which would be pretty awesome.  But anyway, back to lizards.  We are now the extremely proud owners of a skink.  Yes, a skink.  The boys have been asking for a lizard for a few months now, I had managed to put them off with various excuses, the gear you need (heat rocks?!), not to mention the actual physical acquisition of said lizard.  It is illegal to sell lizards, so we were fresh out of luck in that respect.  No Crocodile Hunter prowess in this house i'm afraid, no lizard whispers in sight.. so that excuse seemed to be holding its own.

Skink was spotted at the veggie patch, which is quite an exaggeration because there are no veggies, just a barren raised stretch of premium (well I had good intentions!) soil.  The boys had 2 friends over yesterday, apparently one of them is quite adept at catching lizards, and intact I mean, tail and all.  I look out the window to witness a bizarre sight, Legoman wielding a bushy tree branch waving it to and fro, closely followed by designated lizard catcher who was protecting a treasure in his cupped hands.  The dog was off her lead and was trying to play, yes she wanted to play.  I'm sure she couldn't smell the interesting morsel and wanted to investigate further.  So the dog was being fended off with the branch and the faces of the boys was intense to say the least.

Once they were inside I was barraged with claims of needing a container for lizard habitation.  Scrambling through the cupboard I found one that would do, for now.  No, you cant put holes in the lid! It was a Lightning McQueen lunchbox after all. 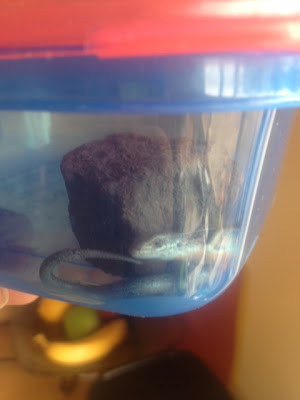 So this morning we head off to the petshop, to purchase our 'desert starter kit'.  Man in shop, "a skink? I haven't heard of anyone keeping skinks"  So no help there, he doesn't know what they eat, or if they grow much bigger, he asked if I had internet at home... umm.. are their people that don't?

Now the skink has a mansion.  Well I guess not if you compare his freedom to now being in a cube with fake plants, rocks, a heat pad, and tiny ceramic balls for sand.

I figured he would need to eat something.  Everything at the petshop was too big for him to eat, live crickets and meal worms.  We needed mini meal worms, and naturally they had none of those in stock.  So there I am, in the drizzling rain, crouched over the driveway searching for tiny ants.  At first, because of the dampness in the air I assume (I'm a lizard expert not an ant one), I couldn't find any ants at all.  Ludicrous! Never around when you need them to feed your new pet skink, but all over the place any other time.  Finally I found some ants, they seemed like they would be too big for skinkies mouth, but maybe he could eat half of it? Well that would do for now, probably more interesting for him then the half dead fly I put in there last night.  Then I hit the jackpot, tiny skink-mouth sized ants.  Scooping them up with a leaf wasn't cutting it, so I had to just pick them up with delicate fingers, trying not to crush them in the process, because I'm certain (remember i'm an expert) they prefer live food.

Once the ants were placed in the cube I became entranced with skinkies movements, egging him/her? on to eat the ants I had slaved over.  I made them myself I told him, from scratch!

Skinkie and I are not on good terms at the moment.  He hasn't touched a single one.   I suppose I shall have to google them as petshop man had suggested, and before he starves.

All said and done im sure the boys are going to be happy.  And that's the bottom line.  Unless skinkie dies from starvation.. but that's a whole other situation to deal with! 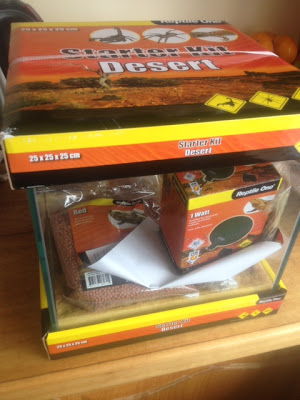 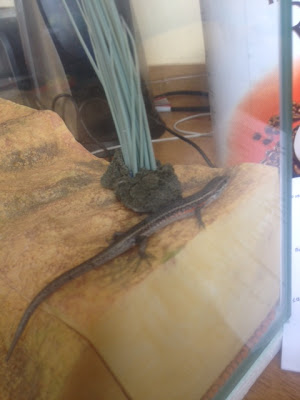 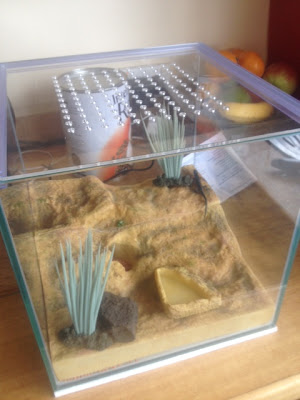 I think the tiny ants will just escape actually, won't that be nice finding them running all over my benchtop. 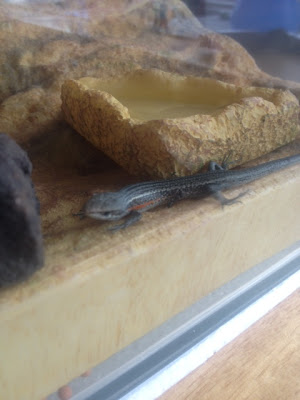 If you look closely you can see skinkie has an ant crawling on him.  Way to go skinkie!


I just checked on skinkie, the ants are enjoying their new home and skinkie is cowering under his waterbowl rock.
Posted by Unknown at 12:51