I have decided to finally wean Pichu, he's 19 months now.  He loves his milkies, so this isn't going to be easy. It had started to get a bit ridiculous actually.  He would want milk all the time, anytime he was upset, or a bit peckish, or just because Mummy sat in 'the' chair, or at the computer even! We would go out for coffee, and Pichu would be there getting his 'coffee' too.  But the deal breaker was at night, I honestly didn't care that he had a night feed (or 2!) up until about a week ago.  He would have milk and go straight back to sleep.  We were sick last week, for a week, 3 of us, Oshawott, Pichu and myself.  We had some cracker nights as to be expected, which was fine, we were sick after all.  For several nights in a row we would just be up for 2 or 3 or 4 hours, I have had 8 years of not sleeping well, so no biggie.  Pichu ended up needing anti-biotics, and that soon fixed him up.  A new habit had evolved from this brief diversion from the usual routine.. wanting to stay up half the night!

(I have to pause here as I have been detected.. Pichu radar has discovered Mummy at the computer and he is trying to climb up to have milk)

So at night, Pichu was not going back to sleep after milk, he would seemingly be asleep until I started to leave the room after laying him down. Then he would sook, I could not pat him, hold his hand or even talk to him, he would just shriek in his banshee way until I picked him back up and he would happily suck away again (no milk mind you, just happy to be there with Mummy)  It would often take hours before he went back to sleep, I had even taken to letting him play in his room as I lie down trying to sleep while he played all over me.

Enough was enough.  No more night feeds.  The decision was made.

Easy to make a statement like that in daylight hours, the words fell so easily from my mouth under the bright sunshine and mug of coffee in my hand.

The plan.  2 feeds per 24 hours.  One before his nap and one before bedtime.  Right now we are starting day 3 of this new schedule.  During the day it has become quite impossible for me to sit.  That's right, sit..  because if I sit, and I mean anywhere, Pichu climbs into my lap and assumes the position.  My life has become one of mastering the art of distraction.  He climbs on my lap or pulls and sooks at my legs, I scoop him up and we go in search of something interesting to do.  Unfortunately this has led to a love of textas.. and inadvertently wall art.  Yes, he had done this before, but we had learned to keep all forms of stationary away from his reach.  Until desperate times call for desperate measures and the best distraction of all is that of self expression using texta.  I aim for paper use only, but he seems to have a way of slipping a rogue texta through security and is often caught in the act of drawing on the walls, fridge, toys, books, floor and himself. So we are still working on finding a happy medium where texta and boy can work together in harmony.

Back to night feeds.  The first night of the new schedule I admit.. I caved.  It was 9pm and we were watching The Voice, I started to have doubts.  What if Pichu thought Mummy didn't love him anymore?  What if he was crying in misery and anguish because he thought Mummy wasn't there for him?  She had been there every other night (for 19 freaking months!) why is she not giving me milkies now?! So at 1am when he woke up, I gave him one side.  Miraculously he went right back to sleep!  Yay!  But was awake again at 3am.  Nup.  Not going to happen.  I climbed into the cot with him, armed with pillow, blanket and toilet paper wadded up in my ears. I braced for impact.  Much thrashing, screaming, writhing, and hair pulling later.. oh and he removed one of my makeshift earplugs, because damn straight Mummy if i'm going to all this trouble you are going to hear me!, he went to sleep.  I climbed out of the cot at 4.45am and into the bed right next to the cot.  He woke up at 6am very upset, so we came upstairs to start our day of distraction.

So last night, after a day of standing whilst having coffee with a friend (slightly awkward), standing the entire time of playgroup and cleaning up texta from the kitchen floor and laptop, we had a no night feed night.  He woke at 2am, I climbed into the cot with him (yes, its a very sturdy hand built cot) armed once again with my arsenal.  He carried on a bit, but im pretty sure it wasn't as bad, hard to recall and separate one screaming night from another. BUT! I think it was better.  It had to be, he had no night feed.  Victory!  Strange kind of victory I suppose, one in which I am contorted in a small space with my ears bleeding.  No seriously, I'm happy.  I managed to escape the cot after a couple of hours and get some sleep.

This morning we are friends again! 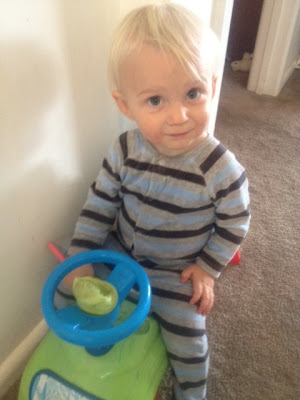 What Mum? No I'm not hiding a texta under here and drawing on the wall and bike. 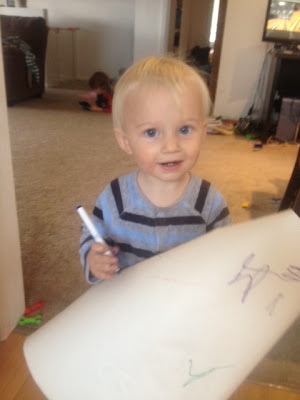 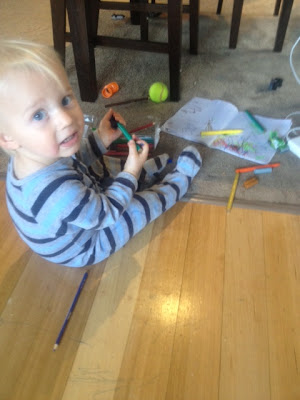 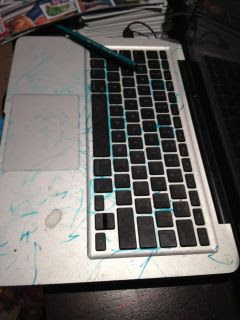 One casualty of a scream filled night and early morning (apart from any spelling or grammar mistakes in this post) was the mega Moccona coffee jar.  This is what happens when you are so tired you put the coffee lid on the wrong way, it gets stuck, and your husband has to try to remove it, ending in a jar of freeze dried coffee and glass flakes. Delicious!  Lucky for the 6months old international roast tin we had stashed away in the cupboard! 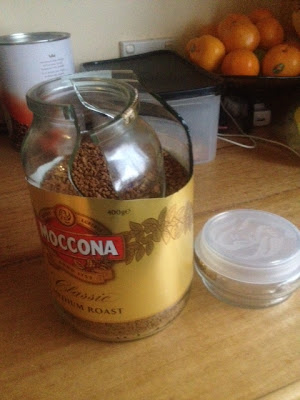