"The Journey Home" - a not so cheery event

All good holidays must come to an end.  So on Thursday we woke up at 6.40 to catch an 8am flight out of Broken Hill. Well that was what the alarm was set to, but I was up at 6, waiting patiently for the alarm to go off.

Not sure what happened, but somehow the good children from Flight May31 had been replaced by the hyper, hearing impaired children from June14. It all began with a lady bug.  Voltorb started crying at the gate, and not because he was sad to be leaving, as I'm sure he was, but because he didn't get a long hold of the lady bug Legoman had picked off of Pichu's jacket, and released back into the wild as we left the terminal.  He cried until we were taking off.  I didn't like how the morning was shaping up so far, but I was optimistic it would improve.  I finally clued in it was going to be a good day around about the time I was accidentally poked in the eye on takeoff.  Because why wouldn't your 8 year old shove his arm through the seat in front of you on the plane and wave his arm around at the same time you are leaning forward to retrieve something out of your bag, coincidentally an "i" device for one of the boys.

One way to get sympathetic looks from staff and strangers on your last flight of the evening: walk onto the plane with a 4 kids marching in front of you.  The youngest not yet 2, but having to walk along the aisle to our seats.  Two of the boys pulling cabin bags, me with obviously heavy bag, backpack stroller, and the all important dozen Krispy Kreme donuts.  Or maybe it was the look on my face, the "I've been up since 6am, travelling alone with 4 precious little treasures, this is our third flight, my toddler had a blowout at the Adelaide airport, we had to go through security twice more then expected thanks to a gate change, we almost lost Oshawott (the teddy), we did lose teddy (the teddy), and the toddler hasn't napped all day" look.

Back to the beginning though.

The Rex flight into Adelaide was fine, mostly.  Obviously not so fun being poked in the eye, but other then that the boys were good.  Happily munching  away on our complimentary snacks while we watched Little Charley Bear and other various shows and games.  We had a rough landing, the weather wasn't so great in Adelaide and it was taking forever to descend via the Adelaide Hills. It was turbulent, and I had to paste a fake calm demeanor on my face, actually similar to the flight attendants!  Except, she has had training in that area and looked downright chirpy.  This wasn't a chirpy moment lady!  The boys were laughing (screeching happily if you are Pichu) at the butterflies in their tummies as we bounced up and down on the changing air currents.  To make matters worse, Legoman decided it was right then that he was busting to go to the toilet.  Great.  The next 15 minutes dragged into what seemed like an hour.  An hour of telling him there was no way he could use the toilet, that he had to hold it until we land.  Once landed, they wouldn't let us off the plane until the bus was there for us to get onto!  Even more great.  He did a fantastic job, very proud of him for being able to hold it in, I had visions of him wetting himself and how we would handle that, and what spare clothes we had packed that I could actually get my hands on quickly. The flight attendant, upon hearing the urgency in our pleas, asked the pilot and let him use the toilet as we disembarked.  One disaster averted.

One averted.. two more arise.  Pichu decided Thursday was a good day to have one of his only 3 ever blowout nappies, and on the day I had no spare clothes for him of course!  No problem, one bonds body suit has been sacrificed in the name of aroma free hand bag.  Then at the gate, about to board, I notice Oshawott is not holding Oshawott (the teddy).  The look on his face was pure horror.  Poor little boy.  Luckily for us, my friend had been catching up with us at the airport and volunteered to go back and search the areas we had been.  Oshawott teddy was on the Rex bus! (probably something to do with the 2 middle children not sitting still and using the whole back row as a trampoline). He has since been popped in the mail.  Thanks Sam! This is a well travelled teddy, he made his way to Broken Hill via express post as I had forgot to pack him! 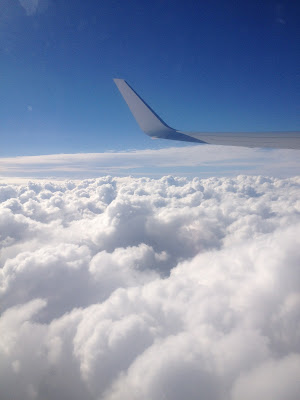 Again the boys were in control of the plane, and this time I was very very naughty and turned my phone back on to film them.  I figured it might be the last time they do it, it's too cute to miss! 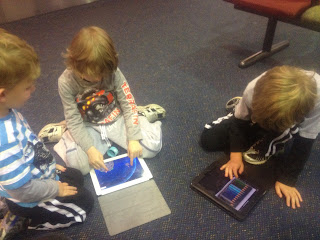 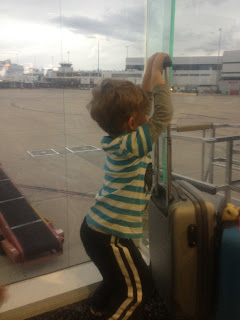 
Oshawott wanted me to take his photo (with the iPhone) but a pesky brother kept getting in the way! 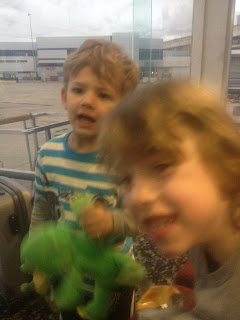 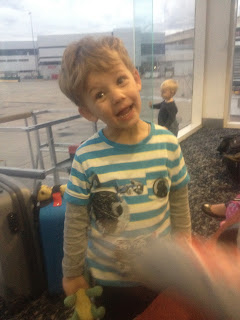 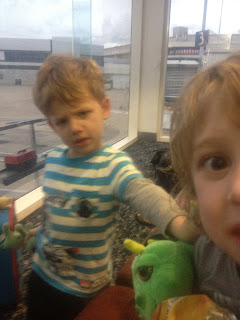 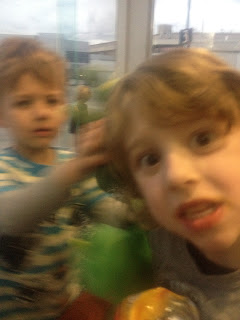 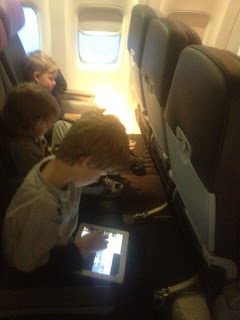 A calm moment on the last flight, after major meltdowns from 3 children.  Voltorb crying because I wasn't going to sit next to him, Legoman refusing to sit on the other side so I could sit with Voltrob, and Pichu crying, well because that's what he does best.  To his credit, Legoman had sat by himself on the previous flight and just wanted to sit with everyone this time.  He probably regretted it later, as he became my 'go to' son.  He had to take his belt off several times to retrieve something from the floor.  First it was Dragon, followed precisely as the seat belt was re-clasped, by Super Croccy.  He also had to hand out the "i" devices once the seat belt sign was turned off, and collect them again at the end of the flight.  All the while I was struggling to keep a very tired and grumpy Pichu occupied enough so he would not cry.  He eventually gave in and fell asleep.

It was dark when we landed of course, and everyone was super excited to see Daddy.  Naturally we were almost the last ones to come inside as it was slightly more awkward then usual to get down the plane stairs.  I was carrying Pichu who had just woken up and not happy, backpack stroller on, heavy handbag, donuts, plus I had to carry Legomans bag down the steps because that is the one with the D7000 in it.  And you know what? I actually couldn't physically do it.  I think it was the first time I had come to a complete standstill not being able to cope. Seeing me struggle, and wanting to get off the plane at some stage that night, a nice man helped carry the bag down the stairs.  He offered to carry it in, but I said we were ok.  We were, Legoman came and grabbed it again. We also had to take time out to admire the working sniffer dog, quickly steering Oshawott away as he reached out for a pat.

It was great to get away for the holidays, but it's great to get home too.  And it will be even more great Monday, when school starts!