School holidays are upon us.  Rather then stay home, being referee for 2 weeks, I decided to take the boys back to Broken Hill again.  It has been a long first term in Hobart, especially for Voltorb getting used to full time school. The boys were super happy with the news, Coder was relatively happy, meant he could get alot of work done on End Permian, but he would miss the ratbags.  So tickets were booked, bags were packed and off we went.  Oh, and I decided to keep this little gem to ourselves and not let anyone know we were coming!

It's not a decision I made lightly, you see, my sister also has 4 children. So turning up on a school night at 7pm, needing somewhere for 5 extra people to sleep is no small ask.

The trip over was fairly smooth.  Travelling alone with 4 children, the youngest being in a pram, the second youngest whinging about walking, and the other two using toys as bowling balls in the airports, certainly gets some looks from strangers.  But it also brings out the best in (some) people.  People offer to help, they don't think twice about trying squeeze the backpack stroller in an overhead compartment, or hold onto the toddler so he doesn't fall off the baggage stand on the bus.  Luckily I do have 2 randomnly capable children that like to pull cabin bags, and even better, know that if they don't there won't be any future solo parent holidays.

Backpack stroller, best recent purchase.  4kg of sanity neatly packed in cabin bag sized backpack.  One little thing made the trip almost pleasant.  Really, I got so many comments, like 'wonder Mum' and 'I don't know how you do it', ahh my little secret.. the backpack stroller! Melbourne airport is a chore at the best of times, but just a tiny bit more stressful with no time (none, we got off one plane and walked right to the next gate as they were boarding) in between flights, carrying a heavy toddler, bags, and keeping tabs on 3 others.  Having the stroller made things much easier. 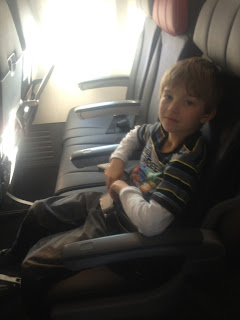 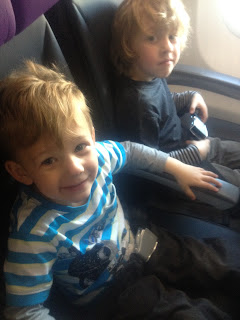 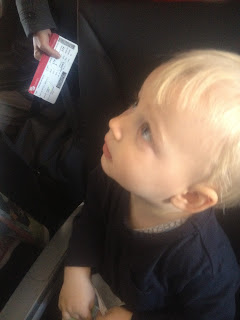 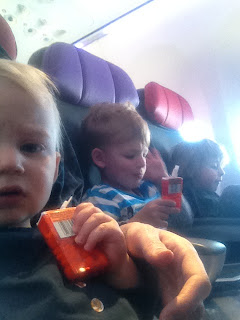 Pichu was intrigued by the constant flow of people finding their seats.  It became a little weird when he started touching their legs on the way past. And, tic tacs = win.  Well for us.  I'm sure the cleaners wont be so impressed with the half packet dropped down into the backs of our seats.

On our trip to Coolum for Christmas, Coder convinced the younger boys they were controlling the plane with the meager seat recline button.  Most people don't seem to know it has this hidden function.  Takeoff speed, altitude, descent and most importantly brakes.  Oshawott in particular takes his job very seriously, and gets very upset if his button doesn't depress properly, how will the plane work?!  I can never get a photo or video of this because the phone has to be always off at those times.

On our descent into Melbourne, out of the blue, Voltorb asked me if I knew the way to the airport? Curious, I said I did, but why?  Well in case we crashed of course.  He was worried we wouldn't make our next flight if we crashed and had to walk to the airport.  Ah, that old chestnut.  Yes Voltorb, I know the way, but we would probably miss that next flight, but they'd just pop us on the next plane to Adelaide.

5 hours in Adelaide airport was a bit of a downer, thank goodness for the fenced playground in the middle!  Pichu even had a nap in the backpack stroller, though I had hold the handle down so he could sleep comfortably (no recline position).  I even got to have a coffee and read my photography magazine (all the while holding the pram handle down). 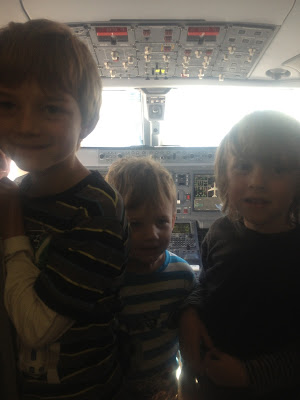 On landing in Adelaide we had 5 hours to spare so we were in no rush this time to get off the plane and therefore took our time.  One of the benefits of being last off the plane is you get to chat with the pilots! 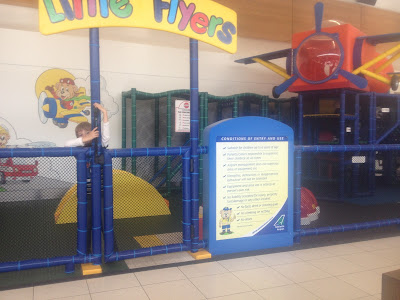 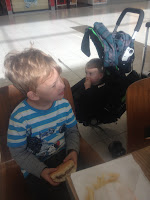 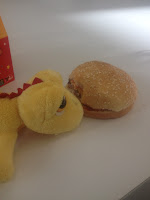 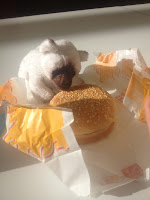 We shared lunch with a few extras. 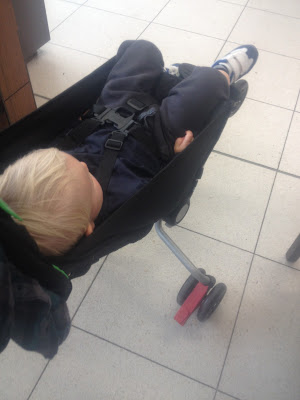 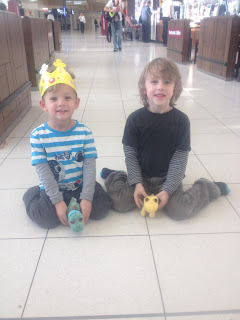 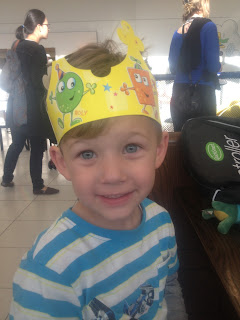 Oshawott loved the special crown that came with his lunch. He was just a little tired by this stage. 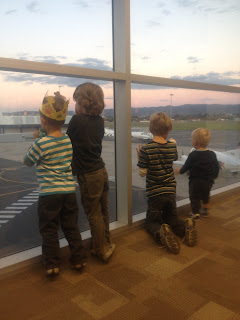 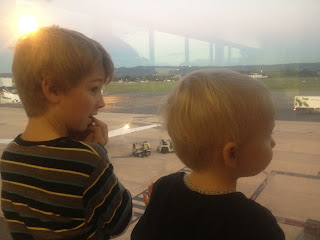 It was dusk while we were waiting to board the Rex flight, big windows, tired kids.

Safely in Broken Hill, thanks Oshawott and Voltorb for that...  we bundled into a maxi taxi and made the short trip to my sister's house.  It was dark.  I asked the cabbie to stop a few doors down, and we lugged the bags (minus one that had apparently taken a detour to Perth), as quietly as 4 tired excited kids carting 5 bags can be, up to the house.  I had the boys ring the doorbell as I recorded.

I don't think they had any inkling!  My sister quickly rang my Mum and made an excuse to get her to come over.

Read about our trip home here. It was not so rosey.
Posted by Unknown at 17:48