Because she has a giant mouth.

Legoman is 8 and has only lost 3 teeth in total. The 3rd one was just this last weekend, and before that it was a year ago that he lost the first two. I sense the teeth are stubborn in this one.

His two top middle teeth are being ground away from use, and no, not from lollies if that's what you are thinking. That boy is a strange one, he doesn't like lollies, or chocolate. He would rather eat a lemon and some olives any day of the week. It was just that they would have normally fallen out by now in most 8 year olds. I was worried he might not have any adult teeth waiting in the wings so we went off to the dentist. She said it was not completely unusual to be 9 and still losing teeth. But, she suggested we get the little stumps out as soon as possible. Let the wiggling commence!

We wiggle those top teeth every night, they are getting a little bit wobblier each day, but I am sure they seem to re-attach themselves by morning time. Like robo-terminator teeth. It's 2 wiggles forward, 1 back. Yes, gross I know, but I have a no nonsense approach to these types of problems, it has to come out? Right then, come here little grasshopper, trust me... I'm a dentist (but you must finish that sentence with an evil laugh to get the full effect).

In the meantime, some of his other teeth had finally gotten loose and he lost his 3rd ever tooth last weekend. We then had to place it carefully under his pillow that night. The tooth fairy would rather it be next to his bed for ease of access, but he was insistent. And naturally, because the tooth fairy is always right... I had quite a time of locating that tooth later that night!

I told him when the top ones come out (if they ever do, I am really starting to wonder) I am going to put them under my pillow because I did most of the work!. Maybe the tooth fairy would leave me a new pair of shoes? He didn't take too kindly to that. 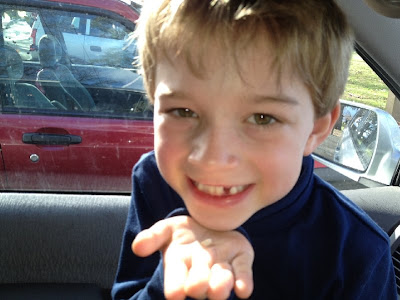 Voltorb is 6 and has had no wobbly teeth, so he is quite intrigued by the whole process. I was coming up the stairs when I heard the beginning of an interesting conversation, so I paused to listen in.

Voltorb: "But why does the tooth fairy need teeth?"

Legoman: Theory 1: "Because she has a giant mouth and needs to fill it with teeth."
Theory 2: "She just likes teeth"
Theory 3: "She has a magic wand and turns teeth into money"

Personally, I like number 1.  I can just picture a delicate pretty little fairy with a gigantic mouth filled with trillions of teeth. Now if that doesn't give you nightmares, nothing will!
Posted by Unknown at 12:49