The Crowd Controller, and a Pageant.

I took the boys along to the Hobart Christmas Pageant 2 weekends ago, we usually go as a family, but Coder had to concede defeat to the dreaded gastro that had been going around.  He felt guilty after we left he said, really guilty.. until his first emergency run to the toilet.  He said that would have been an unmitigated disaster had he been standing with us on the side of the packed streets, not a toilet in sight.

That's ok I told him, I have plenty to blog about already thanks to the council worker who was saving our lives every other minute.

Legoman was going to be the star of the show this year!  (in our eyes anyway!) He was participating with his Scouts Troop and they were all dressed as Tassie Devils. 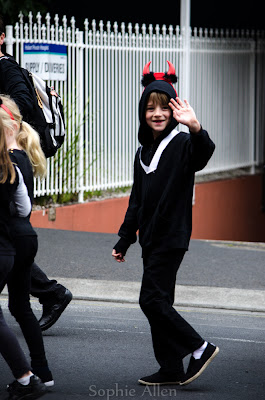 So because we had to be at the start/end area to be able to drop him off and collect him, we were treated and defeated all at the same time.

The treat was that we got to see each float twice.  We also got them while they were happy, fresh and their feet weren't aching.  It also seems, if your son dresses up as a dragon you get -alot- more attention from the passing parade.

The defeat was that were were constantly nagged by one particular council worker, who was insisting we keep our distance in case a rogue steam roller suddenly picked up it's speed by 50kms, was able to actually steer, and mount the curb.. crushing us in an instant.   Apparently standing on the footpath was clearly not safe enough.  We already knew we were not allowed to sit on the curb, oh yes, we knew!   But then he insisted we keep moving back, and he wasn't happy even then!  He made several calls to the powers that be, clearly (because I could hear him as he was saving me from myself) 'dobbing' us in, there was no barrier he kept saying.  "NO BARRIER!  NO CONTROL!" 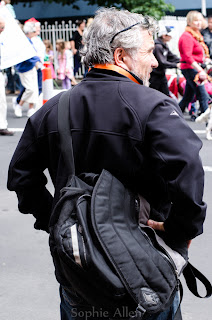 If I put my hands on my hips and stand in the gutter I will seem super important.


Because you know, that flimsy tape that is cordoning off the other areas? Everyone would be much safer behind that.   Clearly.

We were privy to some information whilst there, a school Mum let us know she had worked with that man in the past (at the council) and he was a bit of a control freak.  Also the reason he was so highly strung, perhaps he was one of their lawyers... was that in the 2 years previous there was a an 'incident' each year.  Last year a child fell off of a float.  Ok, fair enough, that explained why the only children on floats this year were in cages.  The year before that a horse became spooked at some balloons and bolted... into the crowd.  Oops.

I may be making light fun of it, but I do realise these incidents could have well been very serious, if not fatal.

We were on the footpath, we were 1 metre away from the curb most of the time!

He even took a photo of us with his smart phone.  Seriously.  I didn't have time to react and take a photo of him doing that, wish I had!

We had a few interactions.  I can't seem to help myself when someone is being so incredibly unreasonable.  I told him that I do manage to keep my children alive when on footpaths every other day, and even when there is actual traffic moving at 60kms, not ambling along at a snails pace of a steam roller.  He told me that it wasn't even a viewing area, we shouldn't be there (along with the other hundred or so people?).  I told him I had a child in the pageant and we were waiting for him, as we were instructed to do.  Well that quickly stopped him at the height of his lecture.

He was happy when his reinforcements arrived, but not happy enough apparently as he told us again to move back because a "-large- vehicle was coming".  Thanks Sir, I'll be sure to watch out for that vintage yellow car carrying the clown doctors.   At least I will be in the right hands when my toes need splinting. 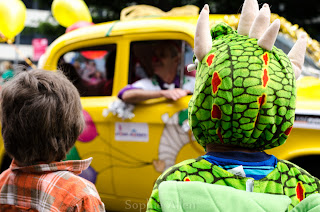 Remember the days at pageants when you would try to collect as many lollies as you possibly could?  You would put on your cutest smile in the hope the people walking along would give you that super awesome radio station or loaf of bread sticker?  Yes.. those were the days, before horse tramplings and acrobatic children. 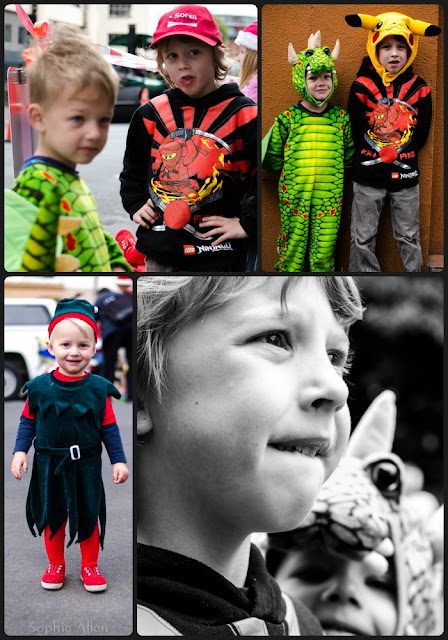 A cheeky, and then reluctant Voltorb posing in his Pikachu hat.
And Pichu, the cutest Elf.  Ever. 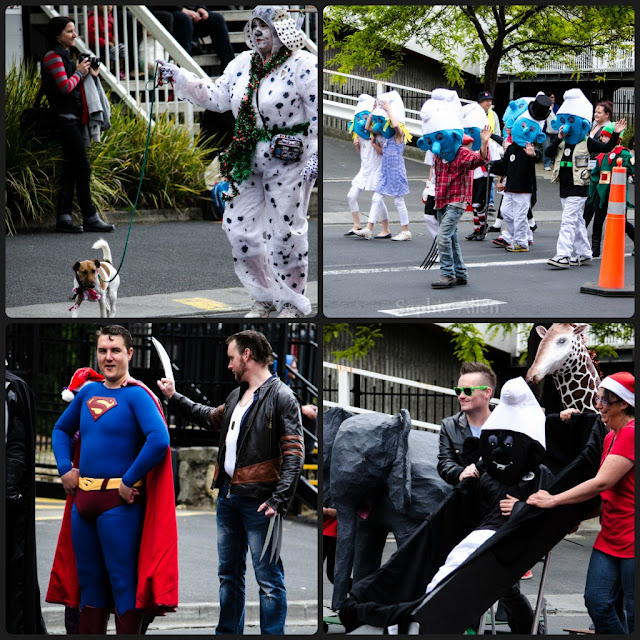 Who is walking who?
Creepiest Smurfs you'll ever see.
Wolverine about to split open someone's skull.
Black smurf in a coffin?  Seriously, I'm clueless on this one. 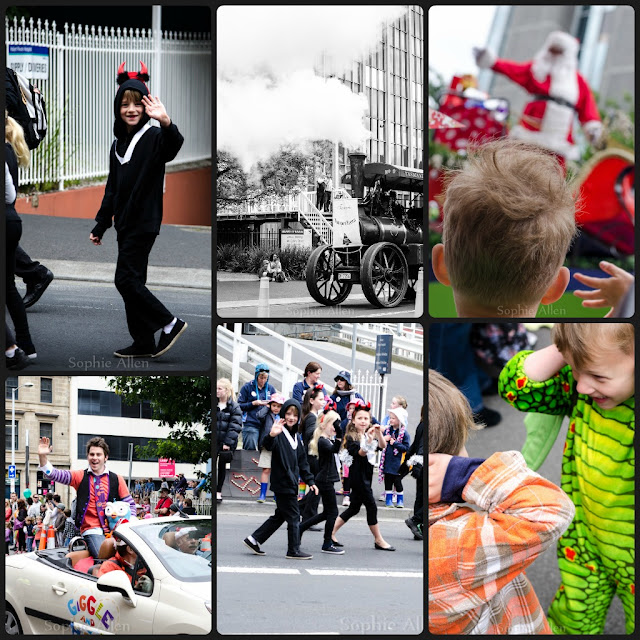 Oshawott even got a special wave from Jimmy Giggle, as Jimmy was pointing out the Dragon in the crowd. 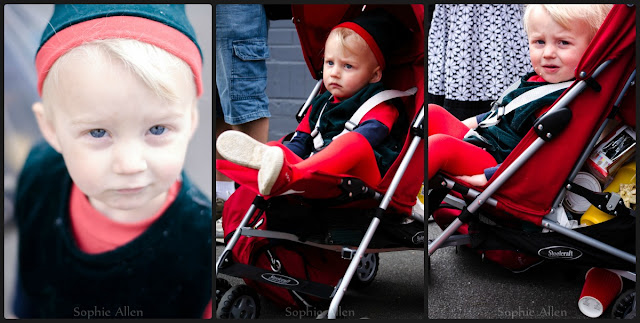 One of the many evil glares of Pichu.
Great, i'm in the pram again.
Over it.


Make sure you check out my giveaway, it ends in just 3 days.