The Great Moscow Circus... brought to you by small bags of popcorn.  Slight exaggeration of course, but at $7 a pop it's not far off!

We had tossed around the idea of going to the Circus since we first saw the signs popping up in December.  But after we got home from Adelaide I thought we might just give it a miss.  Too bad for us the 4 yr old has the memory of an elephant and pipped up one day "It's after Christmas!  You said we would go to the Circus after Christmas!!"

Yes.  I guess I had kind of, perhaps, mentioned it once.

So tickets were quickly purchased online and we trotted off to the Circus on it's second to last day performing in Hobart.  I'm so glad we purchased tickets online like the other hundreds of people, where we then stood in line for 15 minutes as it moved at a snails pace.  Gone are the days of passing through the queues, as we smugly waved our home printed tickets to door staff as if we held the Willy Wonka Golden ticket.   Normally, (well actually 9 years ago!) I wouldn't care about waiting in a queue, but throw in 4 children under 9yrs and you suddenly loathe to queue.

Pichu had not napped, and had to be held constantly to minimise flight risk.

Oshawott, egged on by either of the older boys, was easily led astray to pull up grass, fall down holes, bump into peoples bottoms (not a fun one to apologise for) and just plain wander off.

Voltorb stayed put for the most part, we only almost lost him once.

Legoman, ever the ringleader, and therefore a fitting place for him to practise his craft, decided it would be a good idea to try and pull one of the tent poles down.  He was only swinging on it for a second before we was noticed, honest!

So we finally found our way to some seats, and because we had bumped into some friends in the queue we had 6 bright eyed, bushy tailed children waiting in anticipation.  After spending $30 on popcorn we were ready for the show to begin! 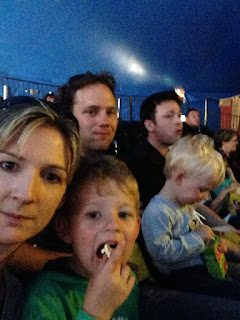 The "everyone has a mouthful of popcorn" selfie.

Actually, make that 5 children waiting in anticipation because Pichu didn't care what he was waiting for, he had decided to make his own fun by swinging himself between the rows of chairs and playing musical laps with Coder and myself. 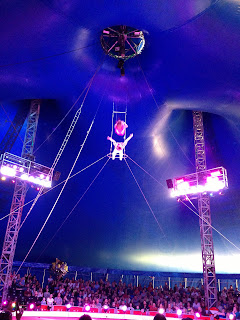 Cool stuff happening up there? Whatever.. said Pichu, I have chairs to play on!

Throughout the first half, he swung, fell, cried, climbed and even scurried under seats until the lady in front, and on the seat he had been hanging from for the most part, offered him a few biccies.  She was rewarded with a whole 2 minutes of respite, the biscuits quickly discarded once all of the salt had been licked off. 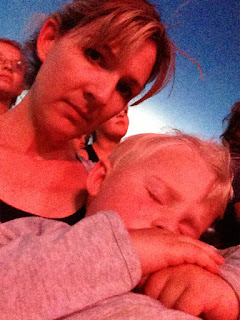 He finally fell asleep during the second half and I am sure I heard a collective sigh from our entire section of seats.  All except the poor guy sitting directly behind me anyway, as each time I tried to lean back to ensure a good sleeping position, my seat whacked him on the knee.

He wasn't the only one with waning interest in def defying feats. 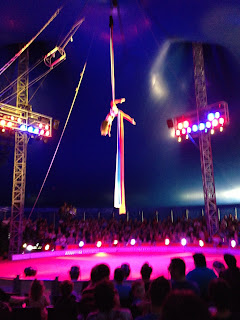 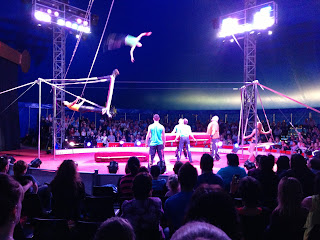 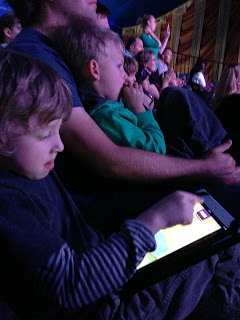 Pichu woke up in time to see the grand finale, it had them all transfixed, even iPad boy. 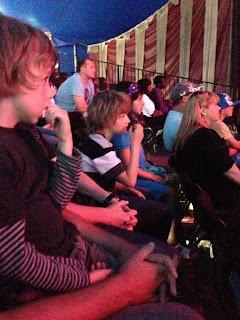 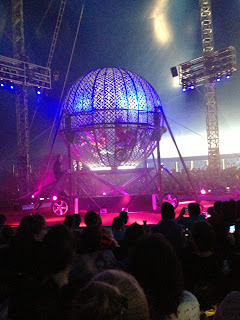 I am joining in the IBOT linkup party that happens each Tuesday over at Essentially Jess.