Mouse in the house

For the last few nights we have been lucky enough to witness Tom Cruise the mouse going all mission impossible on our deck door.  He didn't even mind being photographed! 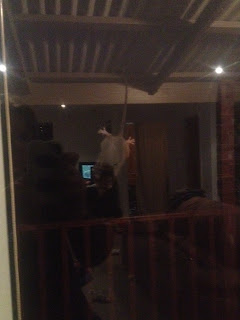 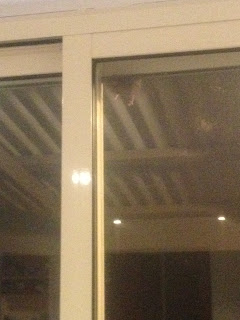 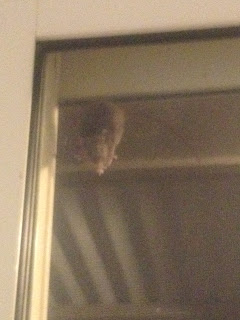 That's were the fun ends unfortunately.  Last night, I was sleeping down stairs, as Legoman had taken over my bed.  He had been out all day, he went with a friend to Agfest (agricultural fair), which is north of Launceston.  It was 3 hour trip each way, so he was exhausted and feeling a little car sick.  So I was downstairs, trying to sleep when I hear munching under my bed.  I head back upstairs to get a trap, then, after complaining to coder about the beginning of mouse season a bit (a lot) I find a spot for the trap under the bed.  Then I can hear a mouse bumping about above me! Under the deck boards I assume, and its probably Tom Cruise mouse.

So that is all pretty normal mouse stuff.  So of course there is a twist, in this house, rarely is anything 'normal'.  We have a mouse in the car aswell.  I suspected it over a week ago, it was the smell, that horrible overpowering mouse smell.  A few days ago my suspicions were confirmed with this. 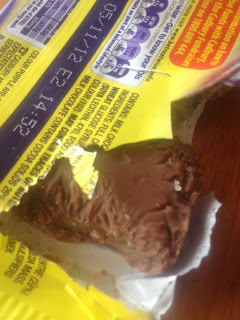 This was a fundraising chocolate though, so car mouse just cost me a $1.  I'm helping raise money for my nephew in Broken Hill, he has his school camp later in the year, and every box of chocolates sold help lower the cost for him.  So I put a trap in the car, at the crime scene location.  No luck.  Next morning another chocolate bites the dust.. yes I know, didn't I learn that lesson already? I shouldn't have left them in the car.  But these ones were in a box, in a plastic bag, all ready to go to our early soccer game.  Again, it was caramello.  Mice like caramel.  That's one lesson learned.  So out come the big guns.  We have a 'Rat Zapper', it's an electric shock mouse trap, big enough for rats obviously.  We usually just use it in the shed, in service as rat control.  Last night I put it in the car, no more Mrs Nice, Here Eat My Caramel Chocolate!  I just checked the trap and the red light was blinking, which can only mean one thing.  One down, 2 to go.  The Rat Zapper is now on the deck.