The Scarlet Robin and the Lab

Last week we were host to a kamikaze bird, and a lost dog.  The bird, a Scarlet Robin, spent much of his day sitting on my clothes line, then launching himself into the nearest window.  Over and over again, we just became accustomed to the sweet sound of bird mass connecting with glass, 'thunk' 'thunk', it was quite rhythmic.  Possibly relaxing even, if I had not known that he was probably concussing himself.  He would have a crack at this for 20mins at a time, Pichu found it to be very amusing indeed.  Robin would leave for a 30min spell, most likely recovering on a branch somewhere, with those little stars whizzing around his head cartoon style, trying not to fall off.  Then he'd promptly be back to his position and right back on the job. 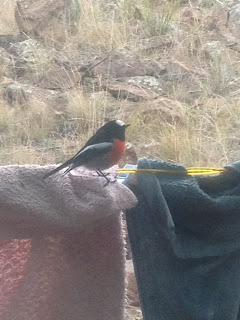 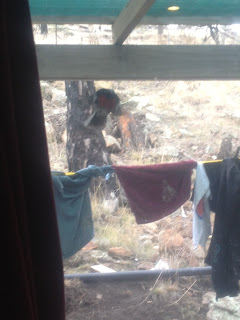 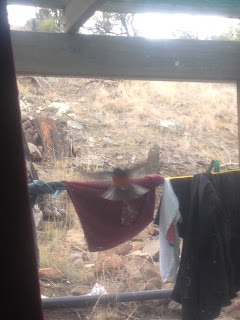 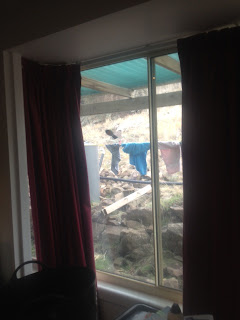 Some theories tossed around were that he may have been attacking his reflection thinking it was another male come to whisk his lady friend off her feet and fly off into the sunset.  Perhaps we was looking for food?  But you would think, and it was obvious he didn't put much thought into it at all, that after the first 100 times and no luck, you would just give up?  But give up he did not, not for days.  The towels on the line suffered, as if being left on the line for a week wasn't suffering enough, now they had Scarlet Robin evidence all over them.  Which is fine, thanks Robin, I really don't have enough clothes to wash.


I did capture this on video, so you too, can enjoy the rhythmical stylings of
the Scarlet Robin.


Then on Thursday we had another visitor.  For those of you that know us, we don't get many unexpected visitors up here, so I was surprised to find Elsie's alarmed barking was a real person and not just a wayward wallaby or a very brave chicken getting too close in the hope of a tasty moth to eat.


Naturally there was a twist, Oshawott was on the toilet at the time that this all started.  I had to leave him to fend for himself, asking him quickly if he was ok and wasn't going to fall in?  Once outside I was greeted by a farm hand with a beautiful sandy white lab in tow.  The Lab was getting acquainted with his sheep in the adjoining paddock, nothing viscous, but he was wary about leaving him roaming all day until he finished work and was able to search for the owner.


It was about then, that Oshawott appeared at the back of the house, with pants around his ankles..


All awkwardness aside it was decided the pretty Lab would stay up here for the afternoon.  I quickly snapped a pic on the way to get the boys from school and sports training following. 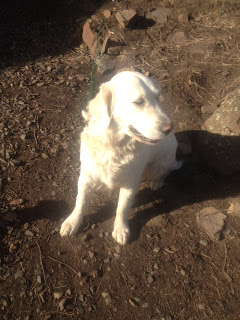 The Lab was gone when we got home.  Coder was sad.  He was hoping we would get to keep her.  She was so well natured, she would have fit in just fine.  But then what would I give Coder for his Birthday?  Ha!! I'm kidding!