Just what we need, another excuse to get out of bedtime.

During our recent visit to Broken Hill the boys got a taste of One Direction (1D).  Actually, they got more then a taste, more like a full serving.  My 3 Nieces in Broken Hill are 1D fanatics.  Posters, mp3's, DVD's, fan pages, clothes. Basically, anything goes.  (like my little rhyme?)

I was out one day, grabbing a few groceries, and I had left the boys with their Aunty.  This is the photo I received in a text message. 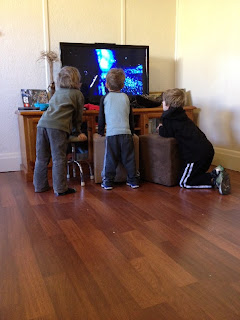 They are literally glued to the TV, couldn't get any closer if they tried actually.  They had asked to watch the 1D DVD they saw on the table.
I think they liked it.

Since then we have all learned the words to their favourite song, 'One Thing'.  There is often squabbling in the car as one boy tries to sing over the top of another.  Might be time to teach them to harmonise!  We could have our own boy band!  (Note to self: Give Simon Cowell a call) Coder has even played it for them on his guitar.  Oh the shame!

But when it gets a little bit obsessive we see this kind of behaviour...

Voltorb wanted to hear 'One Thing' before going to bed.

I suppose it's a good thing, it would be embarrassing if we didn't know their music because apparently, according to Miss S, she is going to marry Harry Styles.  And wouldn't that be awkward at the wedding.  "You're who?"