I got a call from my sister a few weeks ago.


Me: Shrug. (which is hard to translate over the phone)

I didn't have to think too hard, because she launched into her story. And it all started with her in the shower (just like every good horror movie). Well to be fair, she was out of the shower and dressed, but she did have her hair in a towel and NO makeup on!

Doorbell rang, which was unusual for that time of day, but even more unusual that she is not even normally home at that time. Just a freak day she had a few extra minutes up her sleeve (she also has 4 children).

Of course she answered it, I wish I was there to take photos!

She knew this and told him so, afterall you don't want an iconic Australian icon to think you didn't recognise him. He said he would give her $500 cash is she had any of his products in her house. I'm sure by now her heart would have beating a mile a minute, and her mind was certainly racing trying to do a quick inventory of every single product she had in the house.

So with her towel still wrapped in a towel she ushered DICK SMITH into her house. They stopped at the pantry and searched., and basically.. thank goodness for gherkins!  She was $500 richer and astonished.  She lives in Broken Hill, and this kind of thing just doesn't happen, especially in small country towns.

And on a side note, who even HAS gherkins in their cupboard?!

Dick had the local paper photographer with him, and this is where it could have turned into a horror story! But being a true gentleman Dick granted her request to quickly fix her hair and put on some makeup.

So the lesson here, make sure you keep some Dick Smith products in your house! 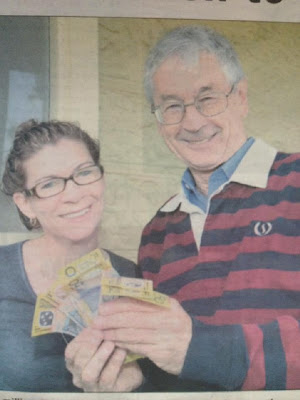 This was on the front page of the paper the next day.
Posted by Unknown at 09:50