We came home Wednesday night, by Thursday morning, after 3 doses of Amoxilcillin, his face was swollen again and had red blotches.  I did a search on the net about Amoxicillin and if it contains Salicylates, and found many salicylate sensitive people have had reactions to it.  I rang the paed ward and spoke to a doctor about it.  They told me to bring him in, hopefully to just swap medicine.  They examined him and switched to Cephalexin. 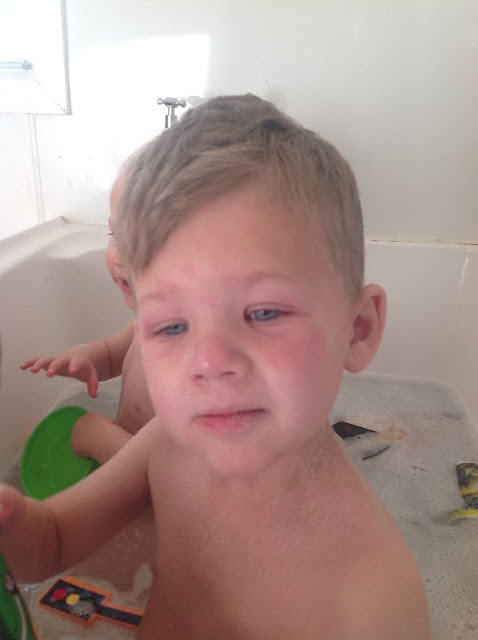 He seemed to handle that much better, no more swelling or red blotches on his face.  But he did have a cough that seemed to be getting worse, so the next morning we were back at the local GP.  He had his medicine there and we waited to make sure he didn't have any kind of reaction to it.  He seemed ok, well, as good as could be expected, and off we went to get a few groceries.

We tried to grab a quick morning tea, Oshawott really wanted some food so he tried to eat a bit of biccy, washed down with many sips of water.  That quickly all came back up after a small bout of coughing.  He wanted a babycino, so I ordered him his usual soy one.  It was just froth (yet they charged me $1.80 for it!) with a mashmallow.  He had that and seemed satisfied for the time being, until another bout of coughing brought it ALL back up.  All over him.  ALL over him, through 3 layers of clothes.  We quickly made our exit, I'm sure the clientele thought the worse of me at that stage.

Thankfully Mum was with me.  We went straight to the parents room and she went to buy him new clothes to wear home. During the drive home he vomited again trying to eat, (poor thing is just so hungry but can't eat properly).  Thanks to a Gloria Jeans take away cup and some fast catching by mummy we didn't lose a drop.  I was sitting in the back with him, Mum was driving.

He was still getting random high temperatures, they weren't constant, it was strange.  At one point on Friday night his temp was over 39 degrees again, and his cough would keep him up for 30minutes at a time until it settled.  In the morning he coughed for about an hour and a half non stop.  It was an awful wet bark sound.  He vomited again trying to eat an omelet, even taking tiny bites and washing them all down.

He was miserable and broke my heart when he asked when he would feel better.  By lunch time I rang the health direct number and they went through a few things with me.  His breathing was getting to be a bit laboured because looking at his chest, it was pulling fast during each breath.

So off to the ER.

Not only that, a heart murmur.  Probably just a flow change, either because he is sick, or growing. But it is another thing that will need to be investigated.

At this point I just about lost it, the tears were there, threatening to spill over if I let them.  I wouldn't!  I didn't.  Everyone thinks I've been so strong but, in truth, it's really been breaking my heart. 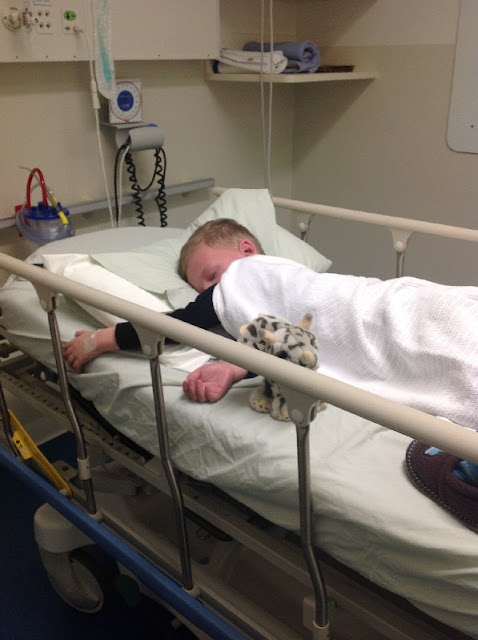 He was admitted again. Thank goodness Mum was here still to help Coder with the boys.  He would have to go to work tomorrow, he already took all of last week off.

Getting the cannula put in this time was no easy task, he was too aware of all these hurty procedures now and put up a good fight.  In the end he was super brave though, as he has been through all of this nightmare.  Even though he tells me he isn't brave anymore when something is about to happen, he always is such an amazing patient.  He has gotten so many comments, partly from great bedside manner in the Paediatric ward, but mostly because it's true.

We are in a single room, for infection control again.  He had another throat and nasal swab, probably to rule out that somehow through all those anti biotics the strep bacteria had survived.  We aren't that unlucky, are we?

During the night his Oxygen saturation dropped below 90% and he was put on oxygen.  Another fun event for all involved.  Waking up a 3 year old (sorry, an almost 4 year old!) at 1am to shove a couple of nasal prongs into his nose was challenging to say the least.  But at least I had gotten 30mins sleep at that stage...

The tube had to be re-adjusted this morning, and when the nurse pulled the old tape off, it pulled some of his dry peeling skin along with it.  Because he really hasn't been through enough yet?! 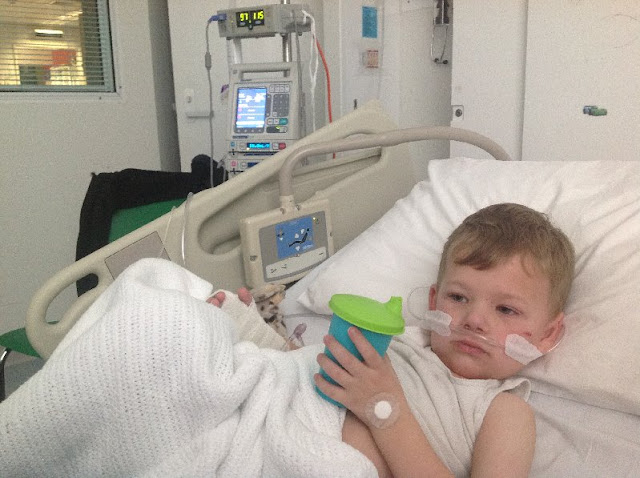 No food intake today, but several cups of milk.  No vomitting!

One of the junior doctors has been around tonight to answer some questions.  He said the result came back as Rhinovirus, yes... the common cold!  Apparently yes, he is just that unlucky to get it this bad, and possibly even contracted the bug here in hospital.  Hopefully he will get weaned off of the oxygen tomorrow, and we will get to go home late tomorrow or Tuesday.  They will just need to do a scan of his heart at some point tomorrow.