The -worst- day ever! (Bushfires)

Well, definitely one of the worst days.

We have seen fires start in the valley before, once we have even been the ones to make that call into Tasmanian Fire Service.  We have a great vantage point of 3 valleys from where we sit high on a hill behind Richmond.   Usually this gives us relaxing summer evening sunsets or chilly foggy winter morning views from our deck.

Thursday it gave us the warning that there was great danger approaching.

We saw the fire, it was around 2pm.  We discussed it's likelihood of being a burn off, but as it was total fire ban, it was basically zero.  Not even a minute after our initial conversation, we saw the flames leaping high on the hill opposite us.

Alarm bells starting ringing in our heads.  We set into action, our bushfire plan?  To leave without hesitation.  We grabbed the boys and the 'important' box that sits by the back door for just this event.   We stuffed the two cars with the important things, made sure the chickens were free ranging and drove away from the home that we hoped would be there when we returned. 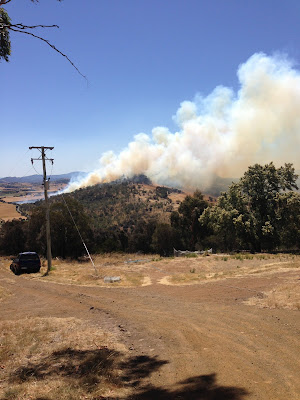 Taken at the top of our hill as we were packing the cars. 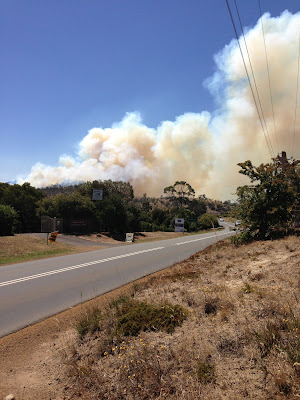 At the bottom of the driveway I took this photo.


I then rang a friend, who lives down the road a few kilometres, a safe enough distance to become our temporary safe haven.  Of course she opened her home to us without a second thought, even though she has 5 children of her own, including a newborn. I sent messages to family and rang my Mum to let her know in case they saw it on the news (which they did later that day). 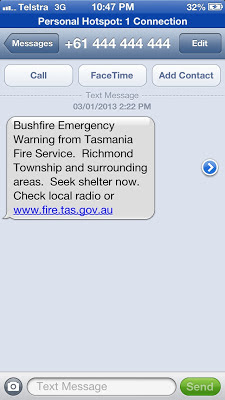 Not long after arriving there, Coder and I both received emergency text messages from Fire Tas. This is when it all became very very real. 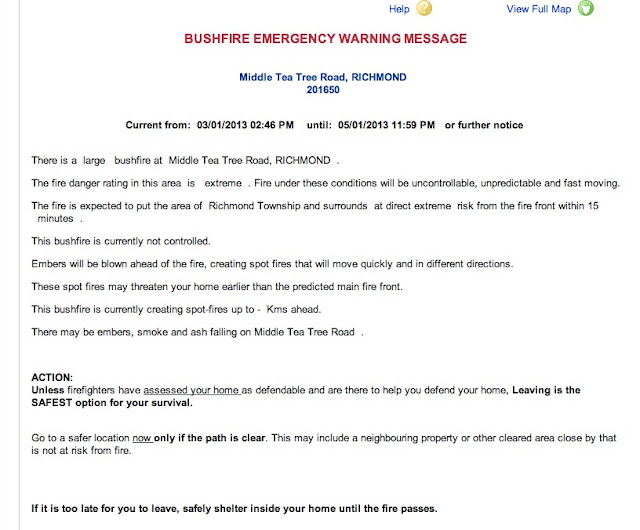 We had been checking the Tas Fire website often in that previous 30mins, but now we saw this.

Bush fires can be so unpredictable and devastating and it has been something that has sat in the back of our minds each summer for the last 4 years since purchasing our 23 acre bush property.  Especially having one road in and out to our house, it's 600m long and very dense bush.  We do have a fire road, but that leads to a small people gate, where you then would have to hoof it down the back of the hill and into Richmond. Though in an emergency, I would soon use the Tarago to make it a car gate, no question!

Once the red Emergency Warning had been downgraded to the yellow Watch and Act Warning, I rang the TFS and asked if it was ok to return home.  I was told that there were currently no road closures and no properties in immediate danger.  So after just a 3 hour refuge, we returned home.

I was able to take some photos from the deck of what unfolded over the course of 3 hours. At which point, after the fire jumped the trench the firies had worked so hard to make, and we could no longer see what the fire was doing as it steadily burned down the hill again towards Richmond, we decided to leave again, to spend the night at another of our friends houses so we didn't have to worry all night. 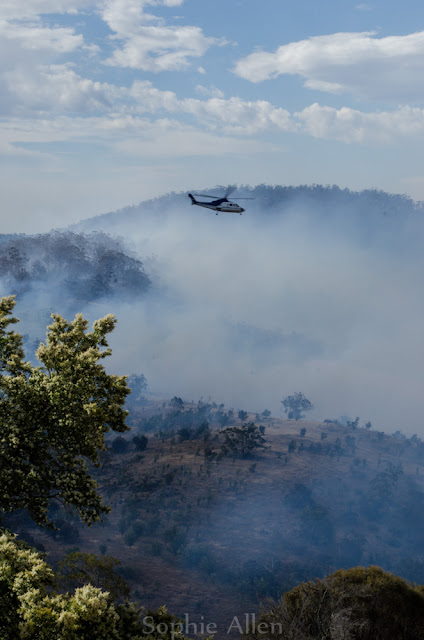 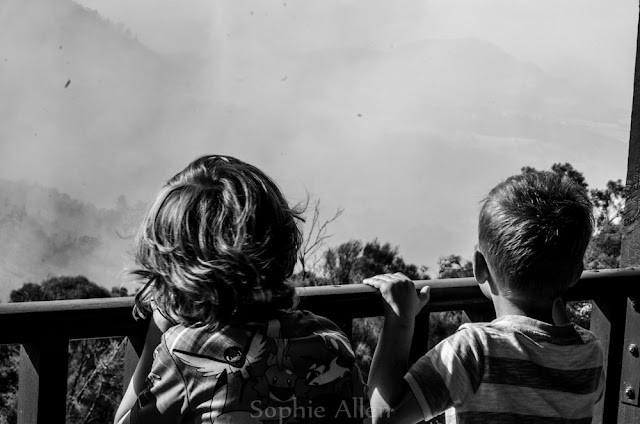 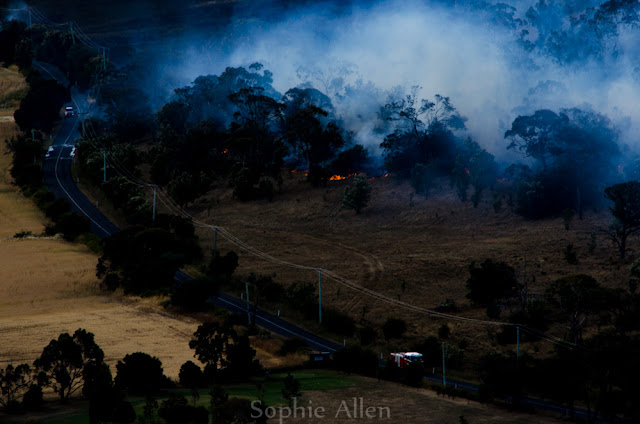 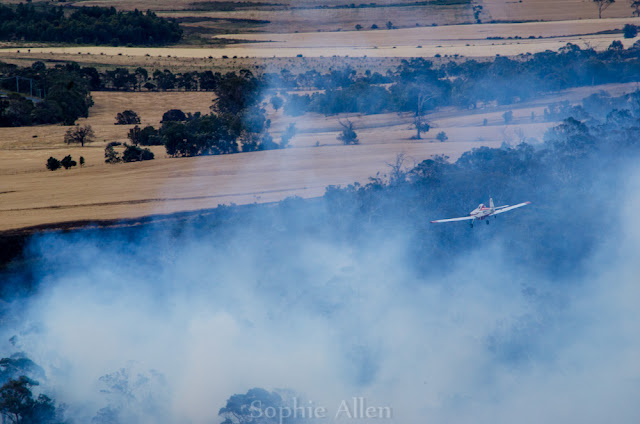 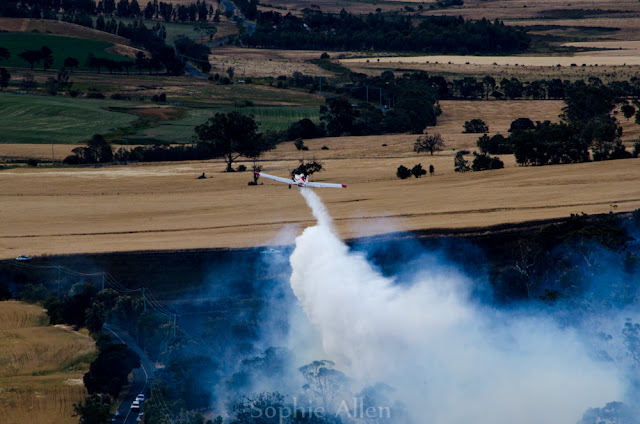 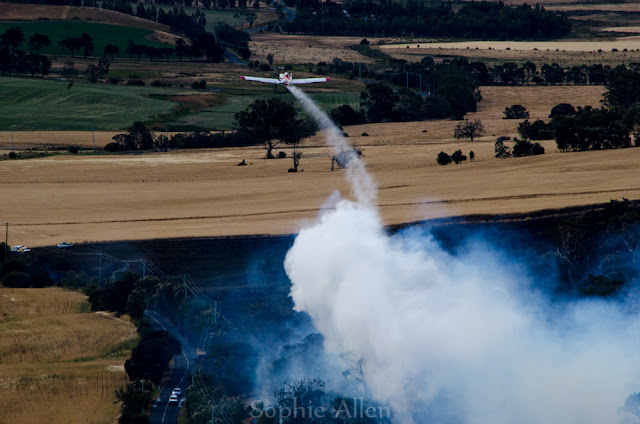 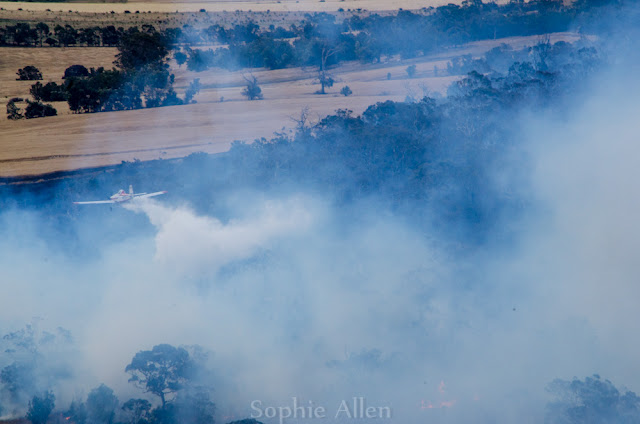 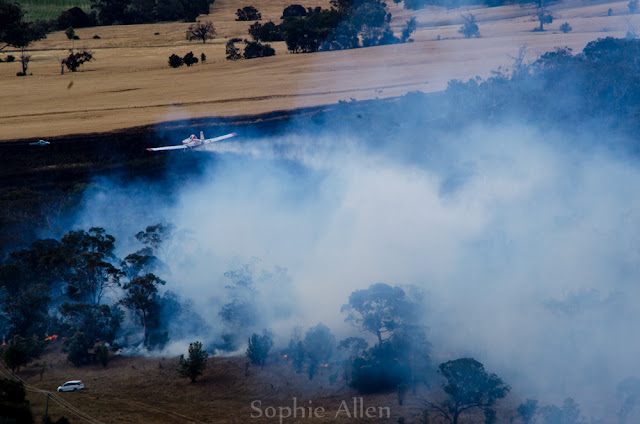 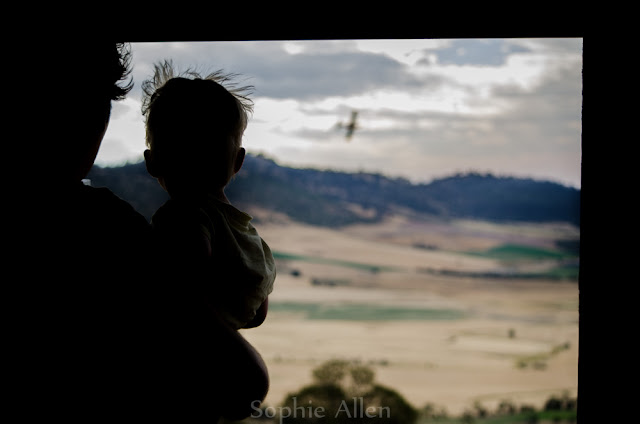 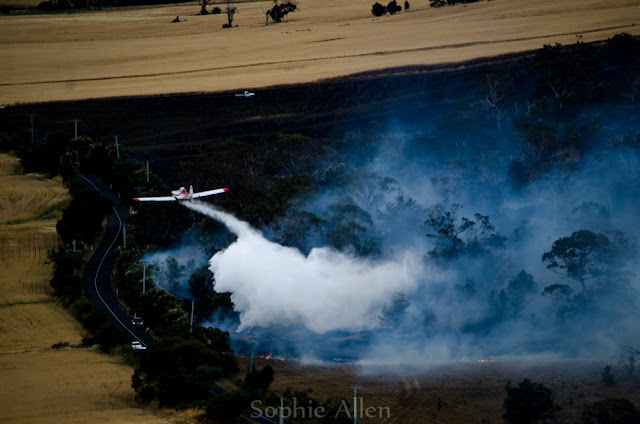 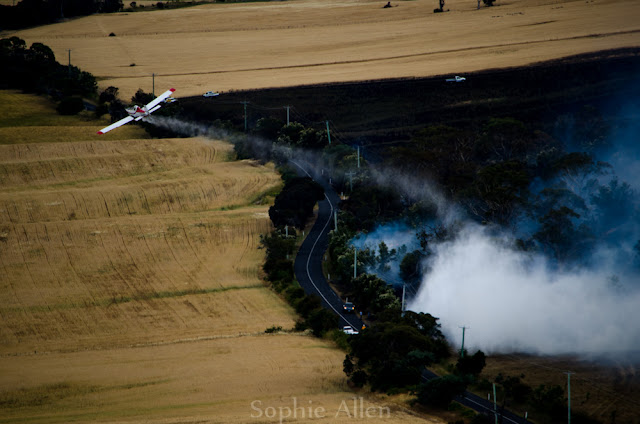 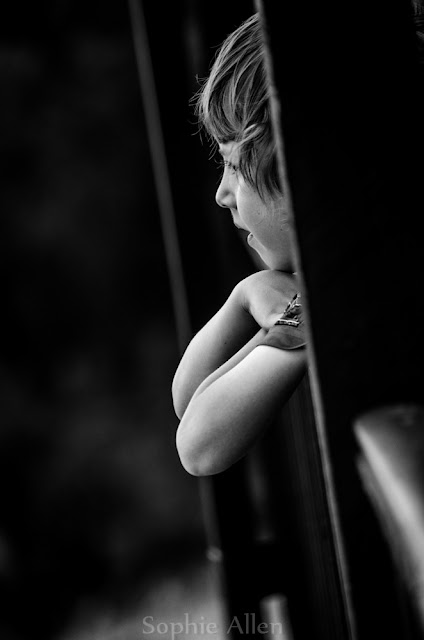 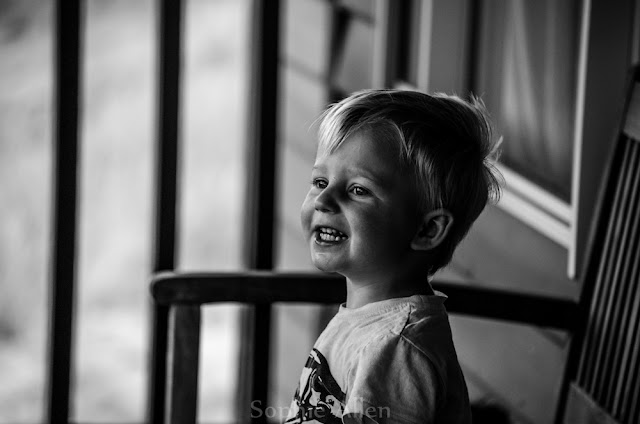 One little boy was super excited to have a plane flying almost at arms reach every 20mins as the pilot navigated through high winds to hit the target with his water load.  He literally almost skimmed the trees at the top of our property as he got into the best position.  We made sure he felt appreciated with our cheers and waves from the deck. 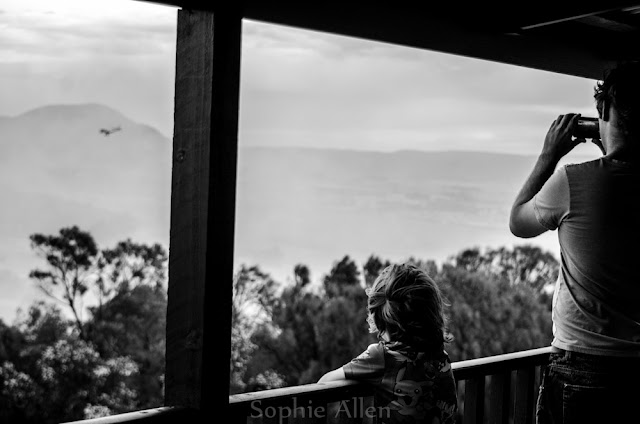 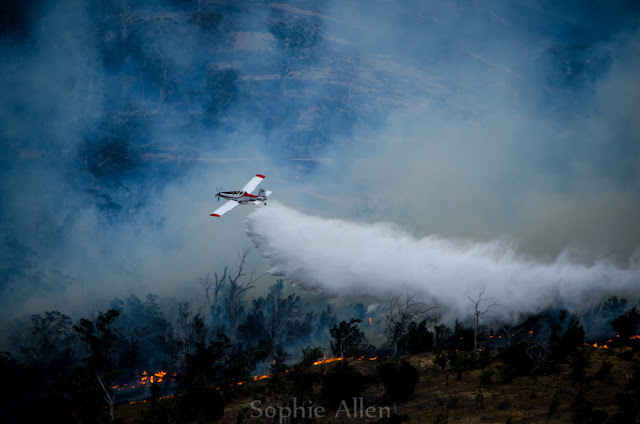 Flying so low to the ground in high wind and low visibility, this pilot is -amazing-. 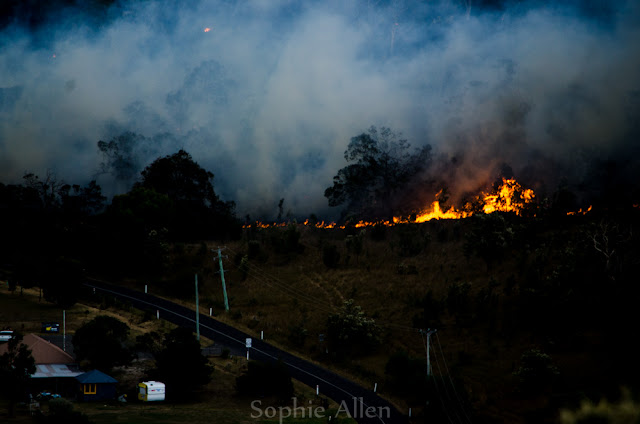 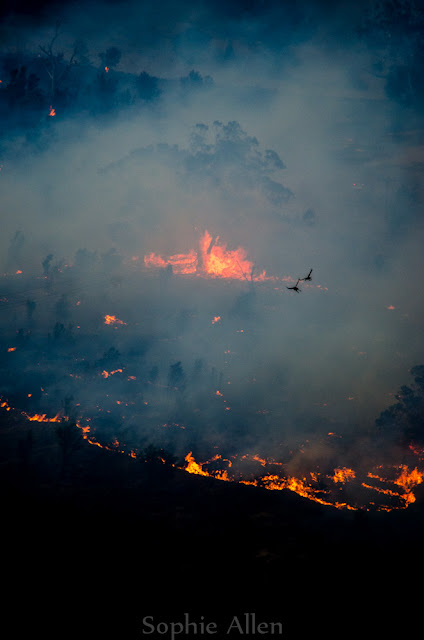 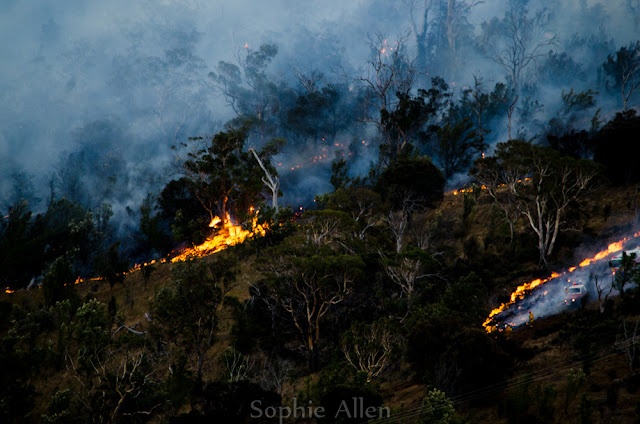 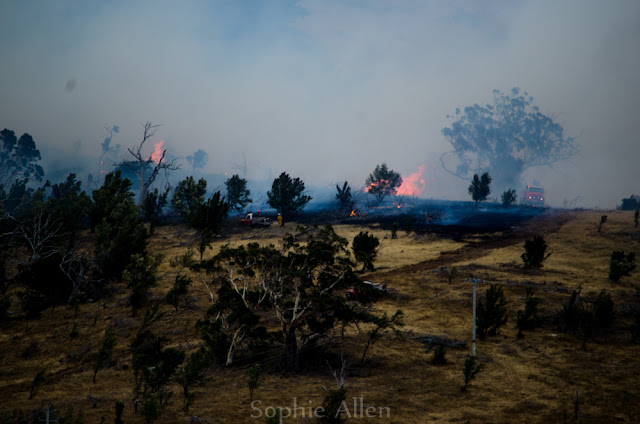 This is the trench they had made in the hope of containing the fire. 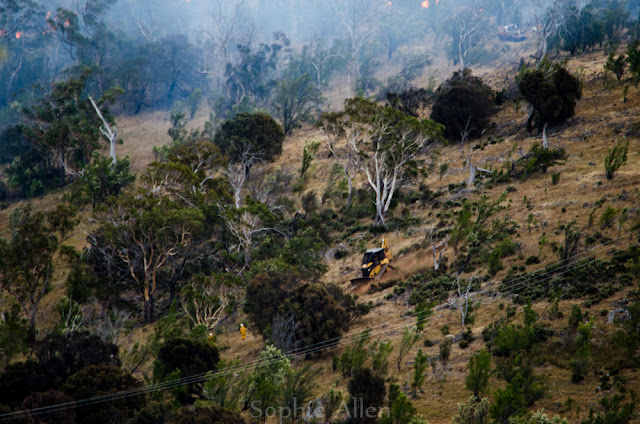 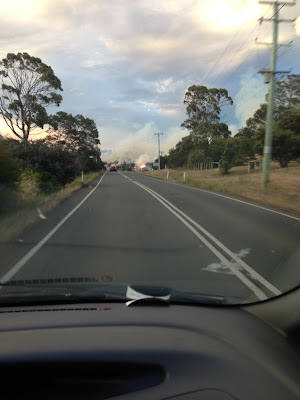 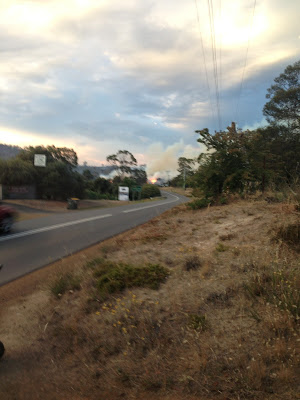 These were taken at 8.30pm Thursday night from the bottom of our driveway as we left for the second time.  No official Emergency Warning this time, but for our own peace of mind as we needed to put tired boys to bed and would otherwise be awake all night.  Seeing as the fire had jumped their break and was burning uncontained again, it was way to close to our property and could have easily jumped the road and been on our hill in a flash.

We came home Friday morning, it was set to be a scorcher.  We had a visit from Fire Tas, who told us there was a real threat of embers starting a fire on our hill that day, because of the extreme forcasted conditions.  They had a plan, our property was part of that.  This was reassuring.  The fire would probably not burn towards the house due to the wind direction, but would backburn towards it.  They would bring the trucks up and set up a break on the Richmond side of the hill.

This was after I had began to relax a little.  So there went any notion of that!

I decided to spend the day with the boys at our Friend's house that we had spent the night.  She had a pool and water activities set up to entertain the kids and keep them cool.

Coder stayed home with Legoman and his friend that was over for the day, but even they soon left when the temperature neared 40 and the wind became forceful.

It was a record breaking day in Hobart that day, it reach 41.8c, the highest temperature ever recorded.   This was not great for the other fires that were completely out of control and raging down the SE and E coast.   If you have seen the news, you would be aware of the devastation.  We feel especially emotional for everyone that has been affected by the fires, and extremely in debt to the dedicated Tasmanian Fire Service and it's volunteers that have worked tirelessly for 5 days without much of a break. 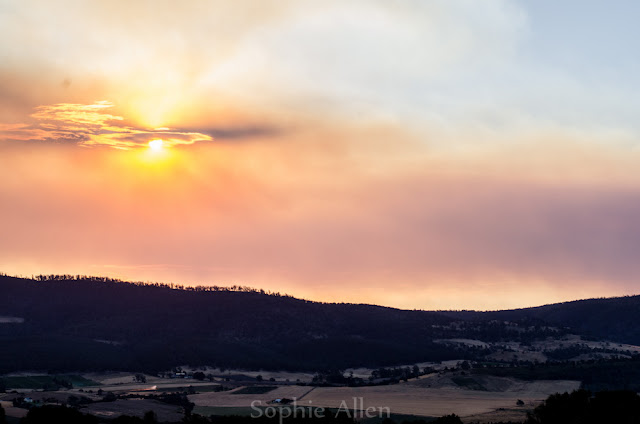 The sun that set on Friday night, obscured by the smoke of the bushfires. was eery and beautiful at the same time. 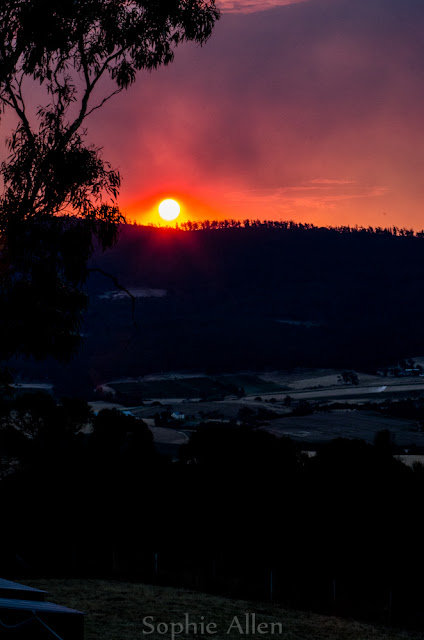 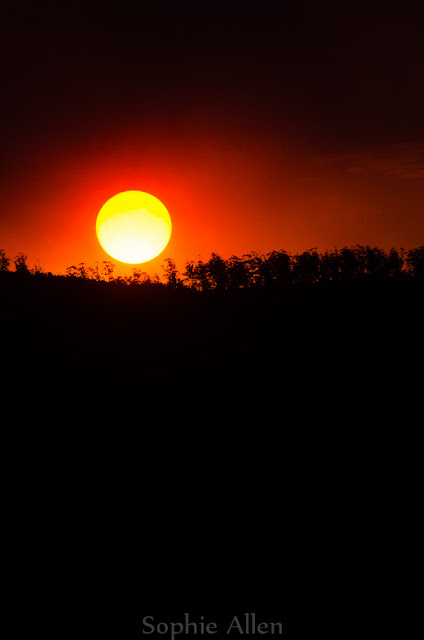 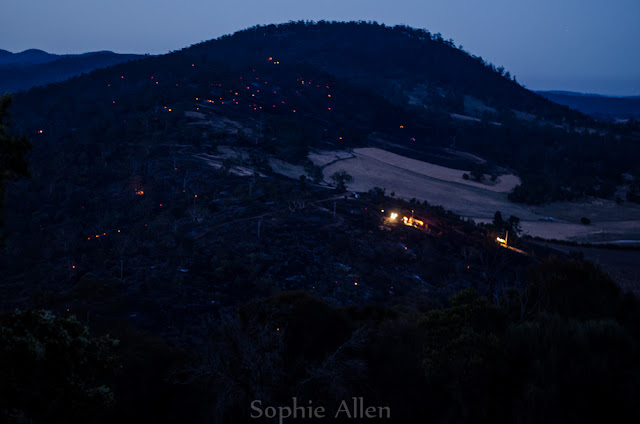 Once night had fallen it was evident just why there was still such a TFS presence on the adjacent hill.  As it became dark, they were then able to easily find the hot spots and put them out before the fire could find it's second wind.

Thank you to all of our Family and friends that have taken us in, enquired about us, prayed for us and cried for us.  Your support means the world to us.  And I apologise for the incredibly long, and photo heavy post, but there was just no other way to tell the story.


If you have enjoyed reading this and/or my photos, please subscribe via email at the top of the page, and one day when I work out how to actually use Feedburner you will get updates in your inbox (I think it may be working!).  Then head over and like my Facebook page.  And then... follow along at Twitter too!

I am joining Essentially Jess, for IBOT,  With Some Grace for FYBF, and Twinkle in the Eye for FBF.