Happy birthday! Here is your dose of croup!

Not the best start to a 7th Birthday.

I had carefully prepared 30 cupcakes for Voltorb to share with his class on his birthday.  The same night he ended up being up most of the night, unable to sleep because of a persistent cough, that was beginning to resemble that of a seal bark.

With just a few hours of sleep under his belt it was obvious he wouldn't be going to school on his Birthday after all. Bummer, he got to stay home most of the day playing with his presents. 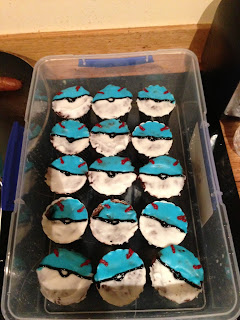 Rather then freezing the cupcakes to use later when he did go back to school, I added them to the pile of baked goods I had made for Oshawott's bike-athon, scheduled that same day.  They were having a cake stall and I figured they may aswell go to good use, I'll just bake more for the class. 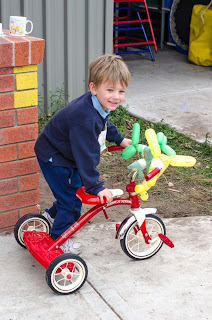 
Thursdays are busy, this one in particular slightly more so, with a bike-athon and a birthday-athon thrown in.  Voltorb came with Daddy to watch the Bike-athon, and impatiently waited for the end of school when I had told him he could open another present in the car with his brothers before he had to go back home with Daddy.  We have swimming after school, so Voltorb not only had to miss out on that, he had to wait until we got him at 6pm to open the rest of his presents.   Yet when I got home with the other boys Voltorb was asleep, finally crashing after his terrible night.  When he woke 30mins later, he couldn't catch his breath very well and was coughing up a sealy storm. So we bundled him into the car and I took him to the ER.

He was much more settled when we arrived, but figured we would get it all checked out while we were there. 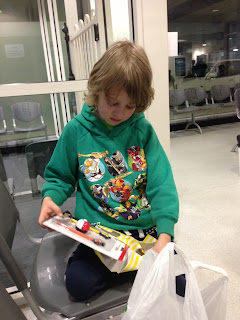 Another present while we waited at the ER.

We didn't have to wait very long at the ER (which seems like an oxymoron!) and he was seem to and prescribed some redi pred, which he wouldn't take of course (allergic to Medicine you know..) so we were allowed to take it home with us to mix in strawberry milk.

Two of the boys were asleep when we got home, so no presents, no cake, no singing and no candles.   Instead we opted for 3 hours trying to get him to drink his medicine.  Always a good Birthday trade off.

The next morning he was feeling much better and opened the rest of his presents.  That night we also did a family cake for him, with singing of course! 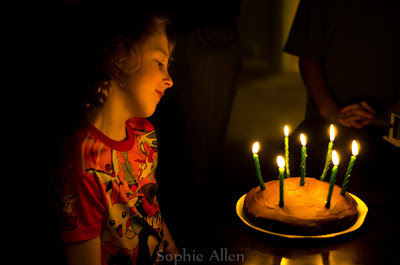 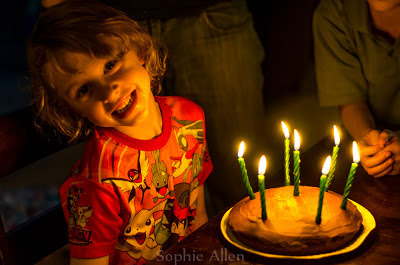 On his request his party was held at the local play centre and what a good decision that was!  It was so easy!

Also on his request I made a Pokemon cake, Tepig to be exact.

If I hadn't have dropped the cake when we arrived it would have been smooth sailing completely.  The cake was ok luckily! Considering it slid off my lap onto the ground from Tarago height was pretty impressive that it was just a bit bent up. 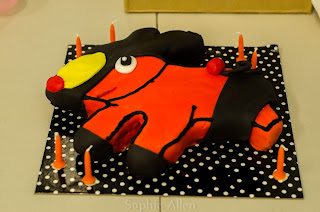 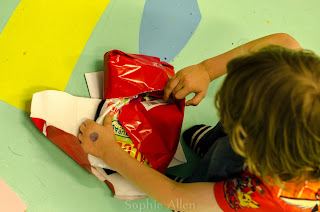 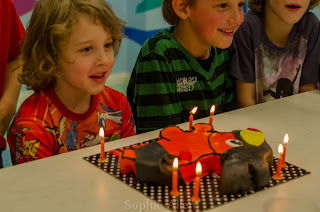 After the party we had one of his friends come for a sleepover.  That was the night we trekked up the back hill to see the Aurora.

And also the night that this seemed like a good idea.. 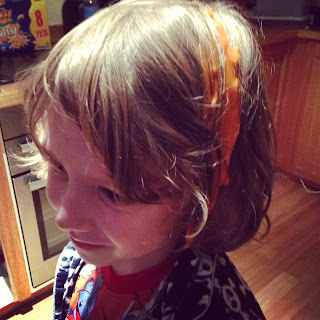 Slime does not come out of hair very easily, funny that.  He had to have a shower and a hair wash, and this was all after he was meant to be asleep!  (King of stalling this one!) 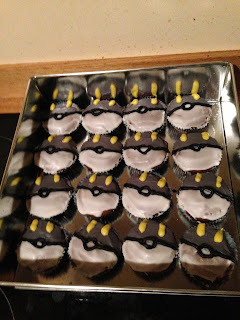 For School on Monday I made a second batch of Pokeball cupcakes.


Overall the Birthday spanned across 4 days, not a bad effort!


I am joining Jess and all of the fellow IBOT bloggers.