So because we haven't had enough drama lately Voltorb decided Saturday to come down with some leaking eye problem.  Ok, so it wasn't his choosing.  Most definitely not.  He is the worst of all 4 of them for tolerating medicine, basically he just doesn't.

Today is Wednesday.  3 weeks ago today was when I first noticed Oshawott's rash.  It's been 21 days, and out of that 21 days, only 4 days of that have been Doctor free days.

Voltorb asked me why he kept having a tear on Saturday, just from one eye.  I didn't think much of it at the time, just that he might have gotten some dust in it during his soccer game that morning.  Tears around here are certainly not an unusual occurrence.  Coder often jokes about when the day will come that we will have a crying free day.  8 and a half years and counting so far...

On Sunday Oshawott had his party (which I will write about soon), and Voltorb's eye was still leaking and now was red underneath.  Apart from being annoyed at needing to constantly wipe his eye with a tissue it didn't bother him at all.  Later that day we visited the chemist for some advice.  He thought it looked possibly like an allergic reaction, yet it was odd that it was only affecting one eye.  That'd be right I thought, we seem to often have odd things in this family when we get sick.  Whooping cough, Scarlet Fever, Pneumonia 3 times, infection in newborn (another story for another day).

His eye was a bit red and had a small amount of yukkiness so we also considered conjunctivitis and took home some drops.  Just in case it was conjunctivitis he stayed home from school Monday and we went off to the Doctor.  He just thought it was viral and said to continue with the drops.

By Tuesday afternoon the redness was still there, his eye was slightly swollen, his appetite was poor and his temperature was 40!  I rang Health Direct and went through the symptoms with them, they suggested taking him to the after hours Doctor, or the ER.  Fun fun fun.  I quickly finished making a delicious risotto (tickets on myself? why yes!) and off we went to the Doctor. In the waiting room, worried because hates medicine.

Doc was very thorough, checking out all possible causes, and asking alot of questions.  I had a little bit of trouble understanding the explanation, but in layman's terms, he got a 'bug' and it decided to infect his eye and the skin around it.

Voltorb is now taking anti-biotics and we have to keep the fever down, so that means paracetamol and nurofen 24/7.  Three different kinds of medicine? Voltorb's worse nightmare.  Four times a day I have to mix each medicine in nesquik-laced milk, so much so, now I worry about diabetes!

He has opted to lie down with a face washer on his head rather then have the other medicine.  Luckily this has worked, otherwise mean Mummy would re-surface and administer pain via sugary drink.

He also has to have 2 more days home from school, which he is not happy about either!  So overall, a pretty terrible week for him. 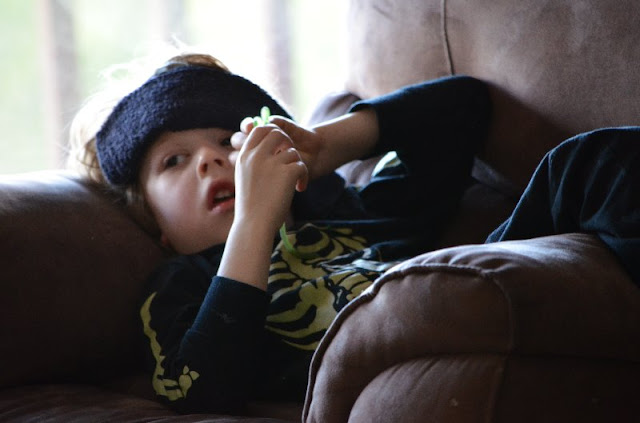